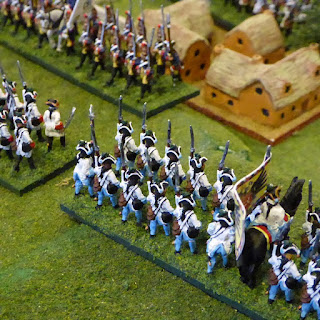 With another refight of the Battle of Kolin in the books on July 15, time for an account of the game.

Rather than allow Frederick to shift his artillery and cavalry before the opening salvos were heard as in Kolin I, deployments stuck to the historical situation.  Any Prussian changes in plan would have to be implemented once the battle commenced.
As a reminder of the battle and the earlier BatRep, scenario and battle prep can be found at Kolin 260th Anniversary Edition.  The prior Honours of War post-game analysis can be found at Kolin Post Game Analysis.

This battle saw the same participants playing the same commands as in Kolin I.  Kevin, wanting to avenge his earlier loss as Frederick, took command of the Prussians with Scott as his second.  Jake took on the role of Daun.

The battle began similarly to Kolin I with an artillery duel all along the front and a cavalry clash on the Prussian left.  Frederick, not content to mass all of his cavalry on the right in this game, pulls all of Pennavaire's heavy cavalry off the right flank and begins movement towards the center.  Pennavaire's cavalry in the center are ordered to support Zieten on the left flank.  Only one of the Prussian cavalry ordered to support Zieten sets into motion.
Almost immediately, Zieten's light cavalry on the Prussian left attack Nadazdy.  Nadazdy's hussars, although inferior, countercharge.  Both hussar units clash and then break off.  One of Nadazdy's units is destroyed in the retreat.  Despite losing hussars, Daun senses opportunity.  Wanting to catch the Prussian hussars at a disadvantage before they can recover from their recent clash, the Saxon chevauleger, moving up through the Oak Wood, smash into the lead Prussian hussars.
In the melee, both combatants fight to exhaustion and scatter.  Is that the result for which Daun planned?  Austrian combined grenadiers move up to support Krechor.  Pennavaire continues his redeployment of the heavy cavalry wing.  To where is Pennavaire redeploying?   With one hussar formation destroyed and the second reforming, Zieten awaits support from Pennavaire's detached cavalry.  Still, only one formation makes its way towards Zieten.
Artillery counterbattery bombardments are taking their toll on opposing guns.  A number of guns fall silent.  Some are forced to limber and withdraw.  Tresckow's Prussian musketeers move up to challenge and eventually throw out the Croats defending the center village.
With the central village abandoned, only a 3-lb battery holds the walls of the outer village.  Becoming the main target of Prussian musketry and artillery, the Grenz 3-lb gun limbers up and moves away before being destroyed where it was emplaced.
Frederick, having committed Pennavaire to a central approach, provides an opportunity to Austrian general Burgholzhausen on the Austrian left.  With support from Graf zu Wied's musketeers, the Austrian left steps off down from the heights.

Counterbattery fire continues hotly with a number of guns either silenced or destroyed.  With musketeers leading the way, Frederick plans to break the Austrian center with deep columns of Pennavaire's cavalry.
With Serbelloni's Austrian heavy horse taking up position on the Austrian right, a breakthrough by Zieten will be a difficult proposition.  While Prussians mass in the center of the battlefield, Austrians begin to turn the Prussian right.
Under increasing pressure on the Prussian right, Frederick orders an all out assault on the central heights.  With musketeers leading the charge on the left and grenadiers on the right, Frederick's masses clamber up the heights.
In the distance, Austrians advance onto the plain, pressuring the Prussian right.  Musketry is exchanged as the Austrians close in on the Prussian right.  Frederick narrowly escapes injury or capture.  This close call shakes the King's nerve as his line of communications is threatened.

Blasted by artillery on the slog up the hill, the musketeers on the left take severe casualties on the approach.  Even before the Prussian musketeers can close with the awaiting enemy, Austrian musketry causes the unit to dissolve.  In the process, several Prussian cavalry units are swept up in the destruction of the musketeers.
Outnumbered and outgunned, the grenadiers fare no better than their compatriots.  Taken with close range musketry, the grenadiers are staggered and forced to retreat back down the hill.

Seeing his best chance of breaching the Austrian position disintegrate as his right collapses, Frederick calls off the attack and prepares to withdraw upon his line of communications.
Another challenging but enjoyable game for the Prussians.  Different Prussian tactic than the previous game but the same outcome; reamed.  Again, artillery played a big role in disrupting enemy formations.  Counterbattery fire was particularly effective for both sides.  Few guns remained on the battlefield undamaged.  With the Austrians now 4-0 at Kolin, does Frederick have a chance at a whiff of victory?

Not deterred, Frederick wants another chance at solving the puzzle that is Kolin.
Posted by Jonathan Freitag at 12:00 AM