Samurai Battles - Return to the Field! 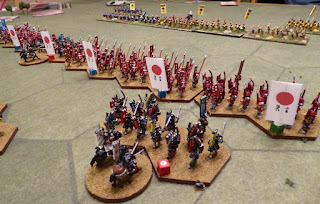 “Time – the one asset none of us are ever gonna get more of.” – Gary Vaynerchuk

In a reminder of just how quickly time can slip away, Friday night's scheduled Samurai Battles' games had me searching through the archives to see when the collection was last out on the gaming table.  The answer?  January 2014!  Nearly three years ago.  Astounding, really.  Enough reflection.  On to the night's activities.

With Jake in town for the weekend, we set up an evening of Commands & Colors: Samurai Battles.  Jake brought a portion of his collection and I fielded mine.  Each would command his own troops on the march towards glory.  Mano-a-Mano, so to speak.  After a quick bite to eat, we sat down to the kitchen table, unrolled the game mat, deployed figures, and got to work.

Since time between our last outing was so far in the past, we began where we started several years ago.  That is, with the Fourth Battle of Kawanakajima (1561).  While Rules Rust was evident at the beginning, that was quickly overcome and we dug in for battle.

Games played were the first three phases of the battle.  Jake took command of the Takeda Army while I took charge of the Uesugi Forces.  Four, pleasurable games were played in about three hours with victory falling to Uesugi Clan three out of four games.

Game 1: Fourth Kawanakajima Phase 1
Uesugi forces jump out to a very quick start and dominate the game using a center rapid deployment of their Samurai cavalry.  Takeda heavies never make it into the battle line to engage.  Uesugi wins five banner to zero. 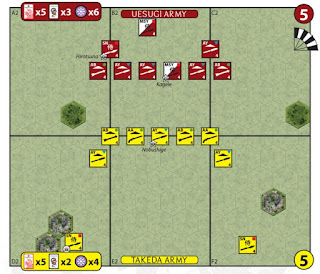 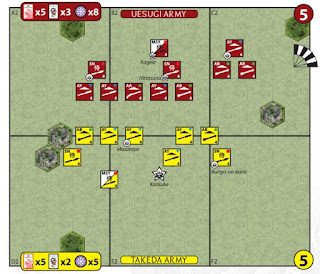 Game 3: Fourth Kawanakajima Phase 3
Uesugi forces launch a quick and devastating attack against the Takeda command tent with the Samurai horse to cripple the spirit of the Takeda clan.  Takeda concedes game and it is reset for a redo.  Thus far, the first three games have not been close and Jake muses how he once thought the system was fun and challenging for both!   "Borg must hate Takeda" was heard in table conversation. 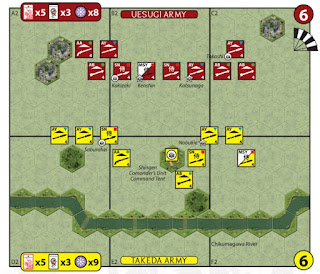 Game 4: Fourth Kawanakajima Phase 3
In a Phase 3 rematch, the most closely contested battle of the night unfolded.  With impressive use of the Takeda Samurai cavalry on the Takeda right and solid work on the left, Takeda jumps out to a 4-0 lead.  Uesugi, not giving in, picks off a Takeda Samurai foot and leader to make the game 4-2.  Takeda takes out one more unit to bring him within one banner of victory.  Current score is 5-2 Takeda.  Showing some resilience, Uesugi attacks with a combination of Samurai foot and horse to rip open the Takeda center and drive the enemy back to the river.  Banner count 5-5.  With one more impulse, the Takeda horse having already accomplished much on the Takeda right, overruns a severely depleted Uesugi foot to claim victory 6-5.  While the first three games were not close, the last battle was a real nail-biter and came down to the wire.

A very enjoyable evening at the game table with a collection that has been gathering dust from inactivity for three years.  Great to see the forces out on the table and arrayed for battle after such a long absence.  Hopefully, their next outing will not take three years to materialize!  Jake, thanks for the games!
Posted by Jonathan Freitag at 7:25 AM