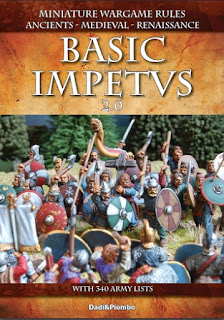 As reported in an earlier post, Basic Impetvs 2.0 (BI 2.0) was scheduled for delivery in time for Christmas.  Dadi & Piombo made good on that commitment.  My print copy arrived in the USA the week before Christmas.  Even though I ordered the PDF version from Wargame Vault when the release was announced two weeks prior, it was good to get the physical rules in hand.  The booklet is laid out in full color with many photos of figures interspersed throughout.  With a spiral binding, it will easily lay flat on the gaming table for reference.  The bulk of the booklet is comprised of Army Lists.  Total count of Army Lists is 340.  Yes, three-hundred forty!  After many years of having Army Lists scattered in several places, it is a relief to have them all in one, convenient location.  Oh, and there are so many armies I have never considered.

What is different in BI 2.0 vs. BI 1.0 (or BI 1.5)?  Are these differences significant?  To help answer these questions, let's compare the mechanisms between the two (or three) BI versions.
Comparing the lists of one of my favorite Punic Wars' armies shows not a great deal of change although Carthage loses one Numidian horse and gains two foot skirmishers in the version change.

With these changes, light cavalry and skirmishers will become much more mobile with the addition of Evasion and multiple moves.  I imagine a much greater harassing role for these light troops having the ability to delay, strike, and retreat.  While all troop types will be less likely to fail Cohesion Tests against small arms fire, heavy cavalry and heavy infantry will be especially stolid.  Attacking missile troops frontally will be much more dangerous and maneuvering for a flank/rear attack will be much more beneficial.  I look forward to giving the new version a try on the gaming table.  Which armies will see BI 2.0 service first?
Posted by Jonathan Freitag at 12:00 AM