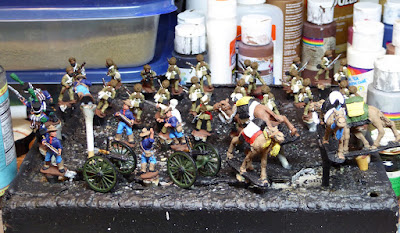 Four different projects are currently seeing progress on the painting desk as 2015 winds down.  Those four projects witnessing action are:

Quite a variety but all common to the 25/28mm size.  Will these muster off the painting desk before 2015 takes its last breath?  I think so.

While too early for me to plan and then commit towards plans for 2016 painting goals, my year-end thoughts have been drawn to a notion of attempting to focus painting output on 15/18mm projects.  High on that Wish List sits the 1799 and 1859 projects.  Add in the SYW and Samurai Battles projects and 2016 could be wholly consumed by 15/18mm grist for the painting mill.  Without the 2015 analytics to back up my hypothesis, seems much of 2015 output concentrated on 25/28mm figures.  Was that the situation?  I will confirm in a week or two when the annual painting totals are tallied.

Over the last several weeks, a number of wargaming items have plopped into my mailbox.  Books, games, rules, figures, and supplies are a few of the categories having been deposited.  Likely, at least a few of these will be recounted in coming posts.

Finally, holiday social activities continue tonight with card games (no wargaming fare, though) with friends and family followed by a wargaming session on Sunday.
Posted by Jonathan Freitag at 4:26 PM