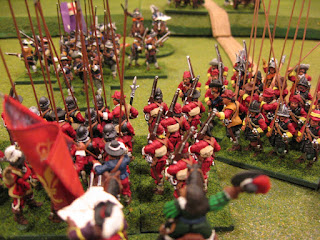 The final ruleset of the trilogy under scrutiny using the Battle of Southam as the baseline is Howard Whitehouse's Ironsides.  Actually, Whitehouse's Ironsides forms the foundation for my interpretation and amendments to his rules.  Earlier trials tested One-Hour Wargames (see Southam BatRep using OHW) and Basic Baroque Impetvs (see Southam BatRep using Impetvs).

As a reminder the battle began with the deployments illustrated in the photo below.
Parliamentarian Army under Lord Brooke leads off the battle by advancing his line from the heights.  Brooke's guns open up against Northampton's gun deployed near the river.  In a spot of excellent shooting or good luck, the Royalist gun is hit and retreats back across the river searching for safety among the buildings of town.  The Royalist gun was not to take any meaningful part in the remainder of the battle.
Middleton's horse on the Royalist right charges towards Brooke's Left Wing horse under Fiennes.  Passing its Response Test, Fiennes' trotters counter charge as horse crash together.  Both horse regiments take casualties in an even fight.  With neither gaining an upper hand, both recall.
Keeping pressure on the Parly's left wing, Northampton's horse moves through Middleton and then launches a charge towards Fiennes.  Disordered from the clash with Middleton, Fiennes calls for his troopers to retreat from the hard-charging cavaliers.  Fiennes' troops just manage to stay out of reach of the Royalist horse as Northampton becomes disordered from the charge.
On the Royalist left wing, Carnarvon charges towards Goodwin's Horse opposite him.  Goodwin counter charges.  In the clash, both regiments suffer heavy casualties but Carnarvon suffers more and falls back in disorder.  Brooke's Right Wing horse under Goodwin pursues, catching Carnarvon in retreat.  Caught while falling back in disorder, Carnarvon's command scatters.

Seeing the destruction of Carnarvon, Clark leads his regiment of horse towards the now nearly exhausted horse of Goodwin.  Unable to respond, Goodwin's Horse is caught blown and cut down where they stand.
Witnessing the destruction of Goodwin's Horse and with Clark bearing down on the nearest Roundhead Regiment of Foot, Brooke intervenes to stiff his regiment's resolve.  Brooke's Foot is able to form a hedgehog before Clark's Horse smashes into it.  Seeing the foot form hedgehog, Clark attempts to rein in his pursuit but hits Brooke's Foot, nonetheless.  Each combatant takes some casualties and Clark recalls away from the hedgehog.
Northampton takes initiative away from the Roundheads and presses on in the center with his foot while Clark withdraws out of musket range.  Not far enough from Fiennes' Horse to get up a full head of steam on the Royalist right, Northampton's Horse pursues the Roundhead horse who fails to stand in the face of the threat and retires.  Unfortunately, Fiennes is not able to fall back far enough and is caught by the pursuing Northampton.  Fiennes takes heavy casualties and flees the scene with the Cavaliers in hot pursuit.
Having lost both cavalry wings, Brooke presses his foot forward in an attempt to defeat the Royalist center before Cavalier horse can return to the fight.  Lord Brooke joins his own regiment to rally them while Holles' Foot advances along the road to cover Brooke.  Hampden's Foot charges the dismounted dragoons near the main road.  The dragoons discharge their weapons to no effect before falling back in front of the Parly foot.
Maintaining initiative Clark advances back into action on the Royalist left to threaten Brooke's Foot in hedgehog while Northampton's Foot charges the bristling hog.  To protect his comrades from a one-two punch from the Royalist horse and foot, Holles leads his regiment in a supporting charge.  Holles catches Northampton before he can contact Brooke.  With Northampton, himself, leading the charge, Holles' Foot is destroyed.  On the right center, the dragoons pour an effective volley into Hampden's advancing foot and the casualties suffered force Hampden to recoil.

Seeing the destruction of Holles, both Brooke and Hampden disengage with Brooke making it back up onto the heights.  With Royalist horse in his rear and two horse, one dragoon, and one foot regiment to his fore, Brooke quits the field.
A Royalist victory in an exciting and tactically interesting fight.  This game was decided in less than three full turns and played as quickly as any of the other two.  I would classify all three as fast play and all three produced entertaining contests.

Now that the soldiers have returned to their storage boxes, remaining to complete is a recap and summary of how these three sets of rules modeled the ECW battlefield.  What did I like and dislike about each?  What were their strengths and weaknesses?  After having played the same battle with three sets of rules, which set do I prefer?

From the BatReps from each of the three battles, which contest did the reader prefer and why?
Posted by Jonathan Freitag at 7:17 PM