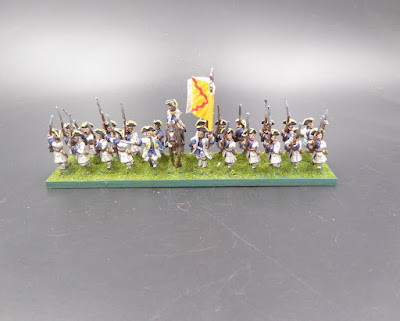 SYW French regiments in 18mm continue to slowly debouche from the painting desk.  One more French infantry regiment passes over to the Completed List today.  Still, a half-dozen more French units are currently working their way through the production line

Off the workbench marches French infantry regiment Comtois.  Figures are Old Glory foot lead by a Eureka Miniatures' mounted colonel.  Flags are by Not by Appointment.  The link to David's blog offers a regimental history for those curious. 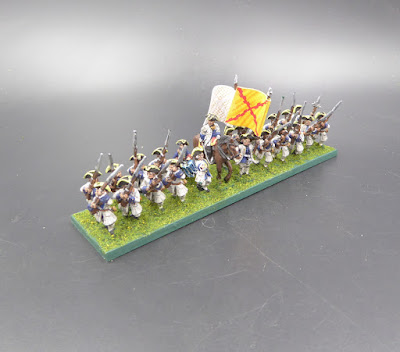 Also on the painting desk, an assortment of Sumerians in 28mm are seeing some activity.  Work is finishing up on a unit of spearmen with a bunch of bowmen undergoing the brush next.

On the gaming front, this past week was a busy one.  I actually did manage to score four games in the week just passed.  The active gaming week capped off with a SYW in India game.  Kevin hosted on his large table using WoFun 18mm figures.  Unfortunately, the EIC (commanded by Kevin and myself) fell to the more numerous French and Natives.  The game was played on a grid with rules loosely based upon Commands & Colors Napoleonics.  Good fun and an enjoyable afternoon spent around a physical gaming table for a change.

With Sunday a day of rest from the game table, Monday sees a return to Solferino with the Rejects in a continuation of last Monday's battle.  Email traffic has been steady this week with questions, clarifications, and planning sessions.  Monday's game should be another fun event.  We will see if player strategies and tactics evolve or change from Session #1.  Looking forward to the action.

Posted by Jonathan Freitag at 8:32 AM