Cycling and the Moose In a twist to my irregular posts on Cycling the Palouse, today, I recount Sunday's ride.

First, the weather has been glorious.  Daytime temperatures in the upper 70's F, sunny skies, and little wind.  Perfect conditions for cycling.  After diving down from my house on the South Hill and winding my way through downtown traffic, I pick up the paved, Centennial Trail as it meanders north along the Spokane River.  The colors of Fall are yet to appear but with shortened days and cool nights, foliage with be turning soon.

After having left the main road and joined the trail at Morin Trailhead, I stopped briefly to snap a photo of the Bowl and Pitcher rock formation from above.
Back underway, a further two miles north, I spotted an animal standing alongside the trail.  A moose!  Now, I have seen moose along the trail in the past but these are not a regular feature.  I was surprised to see it standing motionless just off the trail.
The female standing nearest to me was not the object that took hold of my attention.  I saw sunlight reflecting off of two objects farther down the trail.  Can you see them?
As I continued riding a few yards more, the object came into clear view.  Those reflections were coming from the antlers of a bull moose!
Now, a moose is a notoriously, unpredictable animal and one must use great care when near one.  Since this huge beast was standing silently only a few feet off the trail, I slowed as I approached him and came to a stop opposite him.  The distance was not much more than 20 feet.  This beast was HUGE and he seemed to be focused on the female up the trail rather than on me.  Could I pull my phone out of my back pocket and snap a few close-ups before I spooked him?  Could I get my bike up to speed quickly to out run the moose if needed?
As I reached back for my phone, he turned his head toward me and uttered a short snort.  That was all I needed to realize that reaching for the phone was secondary to preparing myself for flight.  With the snort, the female turned and trotted off in the direction I had, moments before, traveled.  With the female on the move, the bull forgot about me and turned to follow, crashing through the trees with his antlers breaking branches as he passed.  Whew.  That was a close encounter. 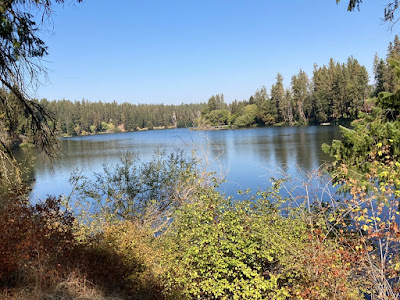 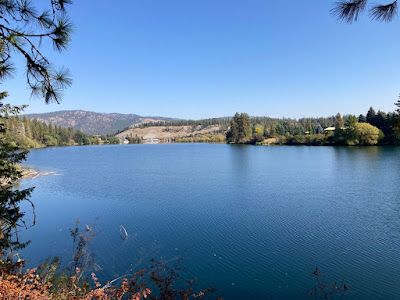 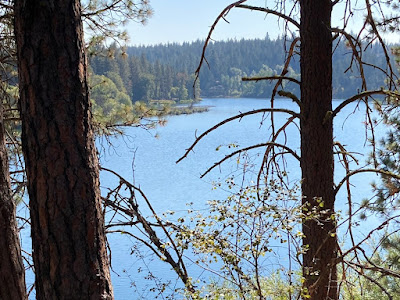 Besides my close encounter with the moose and beautiful fall scenery, the rest of my ride passed uneventfully.
Miles put into the legs: 36.
Posted by Jonathan Freitag at 5:23 AM