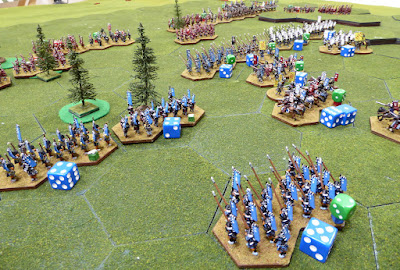 As a refresher to the battle, the initial army dispositions show the Imagawan army almost overlapping the Oda right at the start of battle.  Making good use of this initial position, Sessai attacked vigorously against the Oda right in Game 1 forcing the collapse of the Oda right.  Sessai's deep thrust into the Oda right and rear brought a swift victory to the Imagawa Clan.

Would Peter use a similar tactic with the Imagawan army in his hands?
Read on! 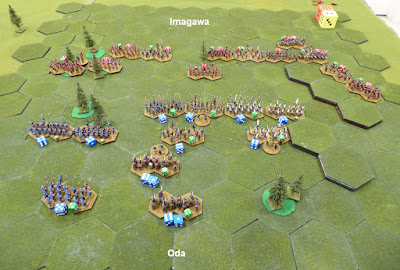 Commanding the Oda Clan, Nobuhide advances his army toward the Imagawa positions.  Seeing his enemy arrayed before him, he is confident of victory.

However, Nobuhide does not fully grasp the situation.  Concealed beyond the line of hills on his right, the Imagawan general, Sessai, masks about a quarter of his army.

Both armies advance with Nobuhide getting the first glimpse of the Imagawan flanking force as it crests the hills on the Oda right.  Nobuhide orders Samurai to take the high ground on the opposite side of the valley.

With Imagawan missile fire softening up the enemy, Sessai attacks on his right and center.
While the Odan teppo hold the treeline facing attacks on the left, the Imagawan Samurai led by Sessai, drive back the Ashugaru spear in the center.  The Ashiguru's retreat forces the supporting Samurai to fall back too, disordered.  Already the Odan center shows signs of wavering.  Archery from the hills above the Odan right weakens the Odan bowmen in the valley below.
Nobuhide responds quickly by charging into Sessai's Samurai with his cavalry.  Sessai holds firm as the melee swirls.  On both wings, the Imagawan army attacks.  Spearmen facing the Odan left charge into the bowmen while Cavalry hit the weakened bowmen on the Odan right.
Cavalry on both sides have trouble crushing the opposing foot.  Those melees continue as losses rise.  In the center, Nobuhide goes on the attack.  The target is the Imagawan archers in the copse of woods.  On the Odan right flank, the Samurai are driven off the second line of hills as the position is overwhelmed by enemy.  Trying to outflank the Odan position, cavalry skirt the foothills in anticipation of sweeping into the Odan rear.
While the Oda spear drive deep into the Imagawan center destroying the archers facing them, Nobuhide is seeing less success on the wings.  First, the Odan archers on the left are driven back with great loss.  Second, the archers in melee with the Imagawan cavalry are ridden down and then scattered to the winds.  Pressure mounts against the Odan wings.
On the Odan left, Ashigaru spear are bought up to stabilize the situation while Sessai launches renewed assaults against the teppo in the woods.  The gunners in the woods begin to waver as losses pile up.
On the Odan left, the Odan spearmen dispatch their adversary and then wheel right to turn toward the center.  Odan cavalry in the center finally scatters the stubborn Samurai but an attack on the right is quickly flanked.  Imawagan cavalry sweeps around into the Odan rear.
While the Odan cavalry sees success in the center, their wings are under increasing threat.  Two more Odan infantry are destroyed.  The Imagawan cavalry in the Odan rear causes great destruction and shows no sign of letting up.  Another Odan foot is within the cavalry's grasp.
One final foot unit is destroyed, and the Odan army breaks.  Nobuhide has seen enough and orders what is left of his army to withdraw.
Victory to the Imagawa Clan, Sessai, and Peter!
Well-played game by Peter and great fun.  The result looks very similar to the Imagawan victory in the first game played with Peter.  The Imagawan left is in a powerful position.  Once it starts forward, it is hard to stop the steamrolling effect of the enemy's weight upon that flank.  Perhaps maintaining a cavalry reserve to counter threats to the Odan right is the right solution? Something to consider next time this battle is fought.  For now play moves on to the prequel battle and the First Battle of Azukizaka in 1542.  The 1542 battle is slated for three playings this week.  Maybe I can win one?
Posted by Jonathan Freitag at 12:00 AM