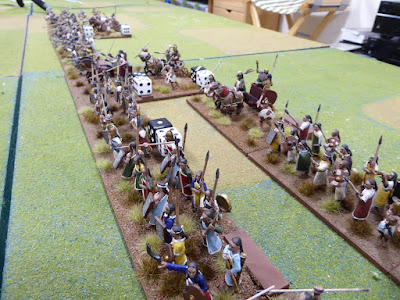 Ian and I convened for a Friday session with another round of playtesting of his Rein-Bow Warriors rules.  Ian would take command of the Hittites while I commanded the Egyptians.  Orders of  Battle would remain as in the previous gaming session.  Thrown into today's mix was a trial of the pre-battle scouting routines.

The Egyptians committed more resources to scouting activities than did the Hittites.  With luck, the Egyptians discovered the Hittites' camp on Day 1 of scouting and out-scouted the enemy.  This meant that the Pharaoh could detach a portion of his army to try to outflank his opponent.  The Pharaoh promptly committed three units to these activities and these troops disappeared from the Egyptian battle line.

While the Egyptian flanking force would arrive at some point during the battle, no one knew exactly when this group would actually appear.  After assessing the situation (the Egyptians rolled a high flank arrival target number), it looked like the battle may well be in full swing (or over) before any Egyptians would appear on the Hittite flank.

Let us see how the battle developed.

Hoorah!  A resounding victory for Pharaoh!
Adding in the pre-battle scouting phase increased the tension as first we attempted to out-scout one another and having completed that, waited for the flanking force to arrive.  I began to wonder if the Egyptian flankers would ever arrive.  The flankers arrived but the battle was nearly decided since the Hittite left was wavering from the Egyptian archery.
The keys to this engagement falls on the Pharaoh putting his emphasis in his archer line.  Both units of bowmen were upgraded to Elite status at the expense of downgrading his chariotry to Veteran.  In the end, the Veteran Egyptian chariotry outshot the Elite Hittite chariotry so that was a wise gamble by Pharaoh.
My recollection is that the battle was decided in under three hours.  More questions surfaced and more questions clarified.  Post-battle, I sent off another battery of questions for review.  Good fun and thanks to Ian for allowing me to get my Biblical armies back out onto the gaming table for another fine scrap.  I learned a lot about Hittite history too!
Posted by Jonathan Freitag at 12:41 PM