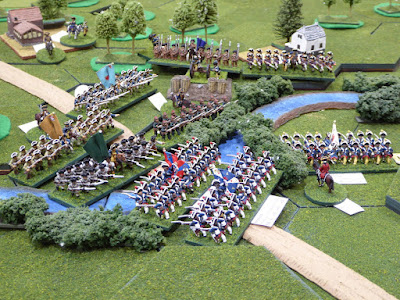 As mentioned in Saturday's post, the Battle of Brandywine was set out on the table in preparation for a Saturday remote game.  A refresher of the battlefield topography is illustrated below:

Terrain for the battle uses a roughly 5 foot by 5 foot section of game table marked off in four inch hexes. Brandywine Creek runs generally in a north/south direction with Washington's colonials on the east bank and Knyphausen on the west bank of the creek. Sullivan defends Brinton's Ford while Greene defends Chadd's Ford.

Brandywine Creek is only crossable at the two marked fords and is considered ROUGH in melee. Units must stop when entering a ford hex and move no farther that turn. Brandywine Creek, fences, buildings, woods provide soft cover.  American redoubts provide hard cover.
Victory points are awarded for holding key terrain objectives, destroying enemy units, or exiting units off the table.  Largest point total wins a tactical victory.
Four players participated in Saturday's game with two British/German players (Darren and Ivan) and two Americans players (Steve and Ken).  This game would be Ken's first remote game.  The other three players have at least one of my remote games under their belt.
Without further adieu, let's get to the battle to see how the action unfolded.
The Anglo-German forces under Knyphausen claim a convincing victory on the banks of the Brandywine.  In the Butcher's Bill below, the Americans suffered mightily but many of the British regiments still on the field were in a sorry state.  Still plenty of energy left to celebrate this great victory, though.
Well!  After about four hours of play (maybe four and a half?), battle was won by Knyphausen.  The battle was on the large side with 20+ units per side.  Plenty of troops to command for four players.  Play moved along at a good pace but still allowed time for some hilarious banter among the players.  Rules continue to provide a satisfying and well-paced game.  Of course, a further modification or two may creep in before the next outing.
Really good fun for me too.  I wish I would have taken a screenshot of Ivan in his ten-gallon pirate tricorn.  The Scottish and German accents were gut-bustingly funny.  From my vantage point watching the big screen TV across the room, I could see all laughing as the comedy routine unfolded.
What about a battle analysis of commander performance and strategies employed?  I may save that for another time.
Thanks to the players for volunteering for this gaming session.  For me, this really was great fun.
For Darren's perspective of the battle, please visit Brandywine Online.
OK. Back to the painting desk.
Posted by Jonathan Freitag at 12:00 AM