To the Strongest! F2F Punic Wars 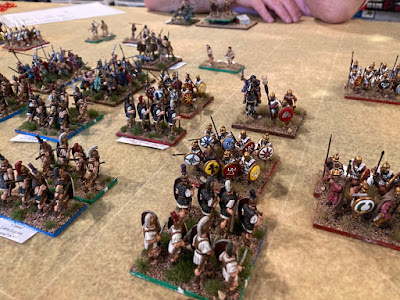 After more than a year hiatus, Scott hosted a game in his Game Room on Saturday!  Yes, there was much rejoicing.  When Kevin and I arrived from our interstate journey, we were greeted by the battle sight shown below: 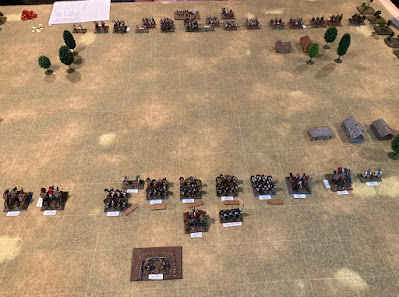 Now, it has been a very long time since we last played To the Strongest! so a bit of a learning curve was expected.  The battle set out was a hypothetical contest in which the point totals were nearly equal.  The Carthaginians had an advantage in number of units so the Romans would be required to earn 12 Tokens for victory whereas the Carthaginians needed only 9 Tokens to claim a win.  Kevin chose the Carthaginians.  Carthaginians move first.
From the starting gun, the Carthaginians began working the flanks while pressing forward in the center.  Actually, pressing the flanks is a bit of a misinterpretation since the Carganinian right wing moved off to take the center almost immediately. 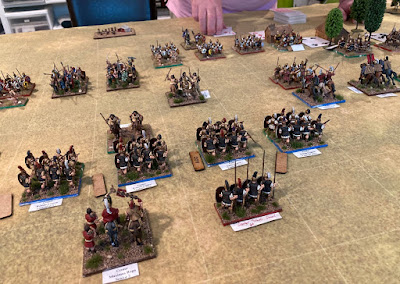 With the Carthaginian right wing quickly moving off toward the center, their right seemed open for possible exploitation once these troops got stuck in among the troops vying for control of the center.  Something to keep in mind for the mid-game. 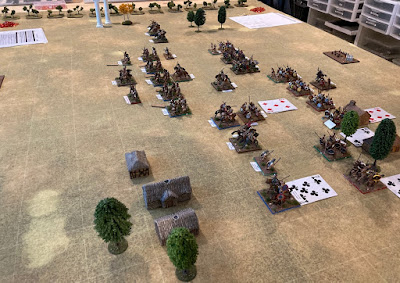 As both lines closed, the center became a large shoving match as the more nimble Roman Legions tried to out-muscle the larger Gallic hordes.  Both sides began taking casualties.  Note that the Roman Hastati and Princepes have the option to line-swap when needed. 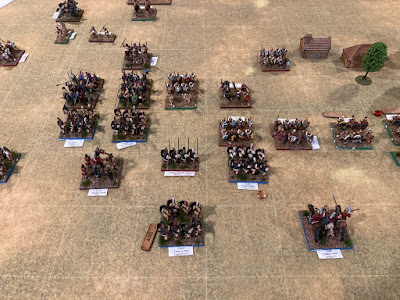 Fighting is hard in the center but notice that the Roman cavalry (in the background) is beginning to outflank the Carthaginian army.  The Carthaginian camp is under threat of attack.  Quickly the Carthaginians respond by sending their light troops back to protect the camp. 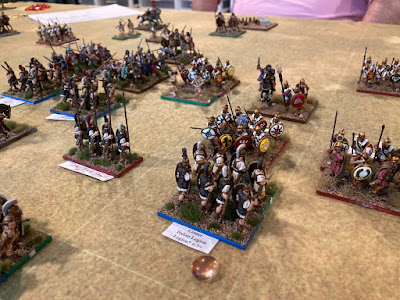 Grinding in the center continues while Roman cavalry on the Roman right attempts to outflank the Carthaginian left.  A lot of move and counter-move activities while each jockeys for position.  The Carthaginian cavalry is pushed back and nearly forced off-table. 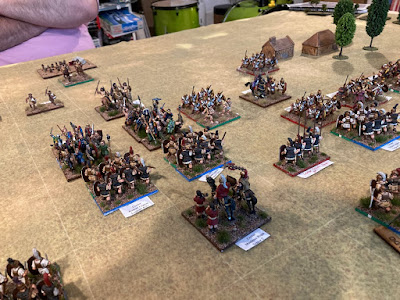 Control for the center continues.  The Romans in the left-center have gotten themselves into a position to launch coordinated attacks against one of the large Gallic hordes.  Horde #1 is scattered! 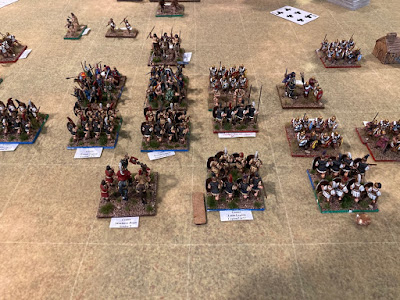 While the initial attack upon the Carthaginian camp was repulsed by a well-timed occupation of the camp by Numidians, Gallic Horde #2 is attacked from the flank by cavalry.  Carthaginians on the right-center have turned in to threaten the Romans.  Casualties are accruing everywhere. 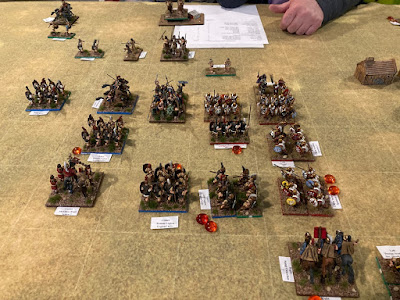 In the center, The Roman CinC slips by an advancing enemy to attack Carthaginian spearmen in the flank.  Can this cavalry defeat the spearmen before they, themselves, can destroy the legion they face? 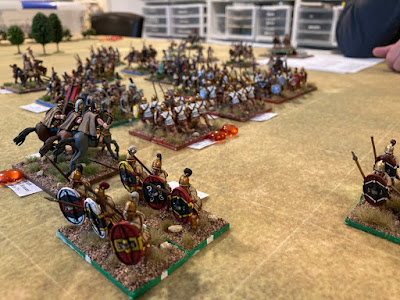 Yes, they do!  In addition to the slaughter in the center, Roman cavalry occupies the enemy camp.  The Romans win 12 Tokens to 4.  Hooray! 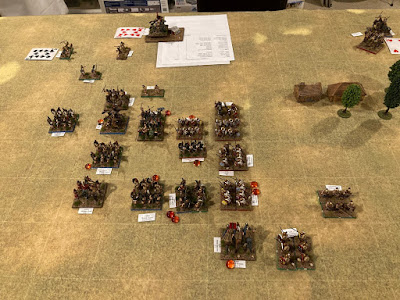 That was a good fight!  Fun too!
While we were all out of practice with the rules, the mechanisms came back relatively quickly especially with Scott's quick adjudications and rulings.  By mid-game, the outcome could have tipped either way.  In retrospect, the Carthaginian movement into the center with the right wing was crucial to Roman victory.  Abandoning the right allowed a Roman strike toward the camp.  Once the danger was apparent, it became a footrace to see who would occupy the position first.  Worth four tokens, this was definitely a high priority target especially for an objective left so wide open.  Having to return to defend the camp cost the Carthaginians valuable time and resources.  In the end, the camp was lost and the Carthaginian army destroyed.
This would be an interesting battle to refight.  Kevin and I departed in the evening satisfied with an enjoyable day of gaming and well-fed.  Always a pleasure to push Scott's beautiful troops across the battlefield and spend the day in the company of good friends.
Posted by Jonathan Freitag at 5:12 PM

Email ThisBlogThis!Share to TwitterShare to FacebookShare to Pinterest
Labels: 28mm Ancients, Battle Report, To The Strongest!