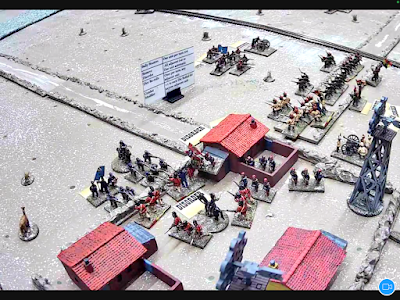 In this week's remote battle, Graham sent us back to South America and the War of the Pacific.  Rules in play would be It's Getting a Bit Chile.  The two Chilean commands are tasked with taking both a hill and an Officia on the Peruvian/Bolivian baseline while the allies have orders to take a hill on the Chilean baseline.  So, both sides need to attack across the table and seize far-flung objective(s).  The Chileans need to take two; the Allies only one.  I command the Chilean left.  Steve the Chilean right.  Ian and Phil command the Allies.  I will be facing Ian's Peruvians as I march upon the hill.
How did the battle pan out?  Being heavily engaged upon the Chilean left, events concerning the attack upon the Officia on the the right are fuzzy.  Therefore, this action focuses on the attack upon the Peruvian front and the hill.
The Chilean guns under my command are brought up and unlimber.  Unfortunately, the guns unlimber such that they are deployed unable to bring the enemy immediately to bear.  Rats!  One turn is wasted to pivot the guns.  One hazard of remote play is that one cannot always see what one is doing!  The remainder of my command moves toward the enemy occupied hill with the cavalry pushing out to the left.

Having adjusted the guns, they begin concentrating fire upon the Peruvians positioned on the slopes of the hill nearest the railroad.

The artillery keeps up its bombardment as the Chileans advance.

As the range closes, the battlefield erupts in violence.  The firefight is fierce but commanders are nearby to rally the troops.

The cavalry on the left press on to the foot of the hill in an attempt to outflank the Peruvians.  The Chilean right descends upon the enemy held Officia.  Bolivian reinforcements reach the battlefield in strength.

With the sight of enemy cavalry approaching a flank, Peruvian infantry holding the end of the Peruvian line forms square.

While pressure is maintained against the Peruvian infantry and Gatling gun on the lower slopes of the hill, two Chilean battalions rush to the foot of the hill and let loose volleys into the square.  The tightly packed square suffers greatly.

The square suffered so much damage in the fusillades that it retreats back down the reverse slope of the hill.  In the continuing firefight on the lower slopes, casualties are mounting as both sides are suffering much disorder.

Against the Bolivian held Officia, the stalwart Chileans continue pressing on and short range firefights erupt. 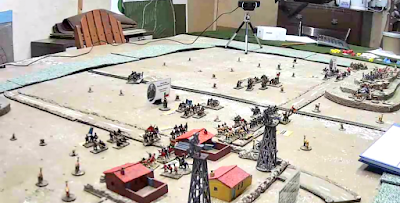 As the Chileans bring up the cavalry, the Peruvian general makes a most crucial decision.  Rather than continue to rally the infantry and guns on the left of his command as the two armies pound each other in the center, he rides over to the right to rally the square before the enemy cavalry arrive.  The Chileans continue to pour a withering fire into the square.  In the commotion, the Peruvian general is wounded and flees the field.  The Peruvians have been abandoned! 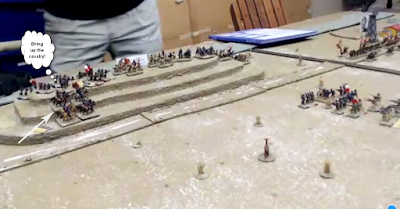 From the Officia attacks, reports are arriving that the fighting is heavy.  Assaults are going in against the complex.  Casualties are high but the Chileans fight on. 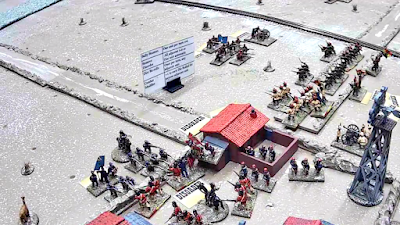 Several Chilean battalions are repulsed but hope is not lost.  Bring up the artillery! 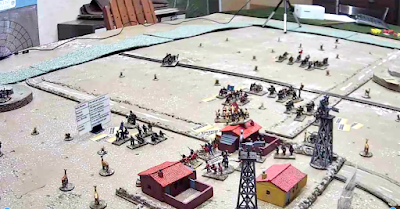 The Peruvian flank has been turned!  On the ridgeline, Chileans are enfilading the Peruvians as a cavalry charge is prepared. 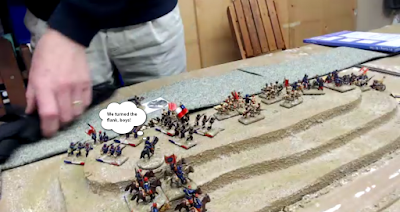 The rightmost Peruvian battalion on the ridge turns to face its foe just in time to see the square below it wavering... 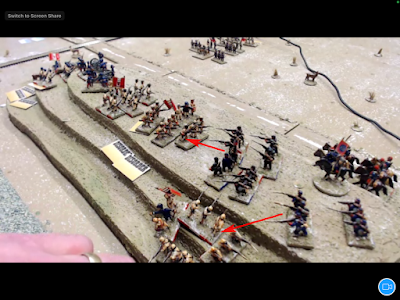 and just in time to find itself the target of the cavalry charge.

The square, below, dissolves and flees to the rear as the cavalry hits its target on the ridge.  Holding the advantage, the cavalry forces the Peruvians off the hill in disarray.  On the opposite end of the hill, casualties mount quickly.  With no general to rally the weakened and badly disordered troops, the Peruvians are forced to retreat.

The Peruvian Army has broken!

The battle has not been won, however.  The Bolivians hold the Officia and are beginning to push back their Chilean attackers.  As night falls, the outcome is declared a draw. 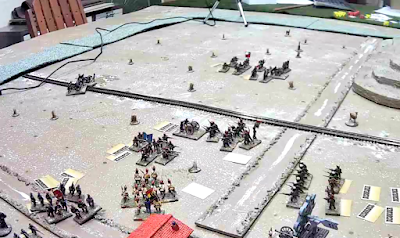 This contest was an enjoyable action, perfectly suited for four players.  Had the battle lasted a few more turns, I wager that the Chilean left could have turned toward the Bolivians and the Officia and given them a little indigestion in attempting to hold this objective.  But, we will never know.
Having only played It's Getting a Bit Chile three times now, much is still fuzzy in my mind.  I am starting to get the hang of the various mechanisms, though, and learning more with each game.  Tactics are beginning to formulate in my mind and plans of action becoming more obvious.  We probably need to get this into a more regular gaming rotation so that my play improves.
Thanks to Graham and my field-general compadres for a fun gaming session!
Posted by Jonathan Freitag at 12:00 AM

Email ThisBlogThis!Share to TwitterShare to FacebookShare to Pinterest
Labels: Battle Report, It's Getting A Bit Chile, Remote Gaming