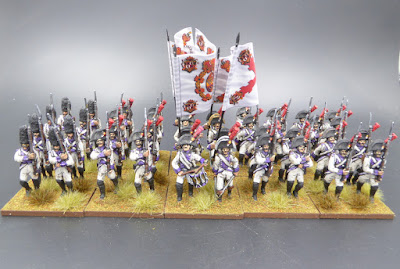 Two-for Tuesday but two nearly the same.  After nearly four years from purchase, two battalions of Spanish infantry muster out.  These two battalions were a long time in coming.  Hopefully, the remaining three battalions of Spanish infantry will not require another four years before they reach the table.
These two, twenty-figure battalions of Spanish were purchased in October, 2017 in an introductory offer from Three Armies Miniatures.  Peter, (Blunders on the Danube), made we aware of these (at that time) recent releases so thought I would dive into fielding a few Spanish infantry for my own Peninsular War project.  I did not expect nearly four years to pass before these fine fellows made it onto the parade ground.  The first two battalions mustering out are Reina and Principe.
As noted in my prior post, remote gaming continues with great regularity.  So much gaming that the painting desk is laying idle more frequently.  Currently working on a variety of units but I would like to turn my painting attention toward 10mm ACW sooner rather than later.  I recently ordered seven bags Federal and Confederate Old Glory infantry (700 figures) to flesh out some units after a rebasing project.  I have my work cut out for me.  Undoubtedly, I will become distracted and tackle other projects before I make it through 700 infantry.  Perhaps I can stay focused by alternating between 10mm ACW and other projects?

Oh.  Back to remote gaming.  I participated in Ross' FRW game on Saturday as a test for his Virtual Huzzah game on Saturday.  We used a version of MacDuff to the Frontier.  With four participants, we managed to fight to a conclusion in about four hours.  Also on the gaming slate is another Virtual Huzzah game using Test of Resolve to refight the WotR Battle of Towton.  Towton is scheduled for 0700 Saturday, my time.  Last but not least for this gaming week, the Tuesday night (Today!) UK group will see a return to the Jacobite rebellion in 15mm.  My hunch is that today’s battle refights the battle from a few weeks ago.  In that battle, the British fought to the last Dutchman while the Highlanders thumped the Government troops and then faded back into the Highlands.  Will the outcome be different this time?  Another busy week planned on the gaming front.

On the F2F gaming front, our State is relaxing restrictions for those fully vaccinated.  We can ditch the mask and larger group gatherings are permitted.  I must admit that it was a very strange sensation entering the grocery store for the first time without a mask this past weekend.