In Matt's quest to fight his way through the American War of Independence in chronological order, his next scenario recreates the action at Great Bridge in December, 1775.  This is an action to which I was completely unfamiliar but turned out into a nifty little battle.

Matt drafted a scenario, OB, and map, and provided the particulars before the day of battle.  As expected from Matt, his table layout was exquisite.  Very tranquil setting, no?

In prior installments in this series of battles, the British have often found themselves attacking the Rebels.  Frontal attacks against defenders in Rebels & Patriots have proven quite hazardous.  Many a British attack has met with disaster.  Given the string of American victories and Matt setting the stage, I figured we may see a different situation and a different outcome.  Well, the situation was familiar.  That is, British infantry attacking prepared defenses.  Not only that but the British assault must pass over a narrow causeway to reach the Colonials.  The Americans were all downgraded to "Green."  That should help, right?

The Americans begin with a picket skirmish line out on the causeway with two militia up on the heights.  The Culpeper militia are sharpshooters.  The remaining American forces are still encamped beyond the town.  No one expects a British assault across the causeway. 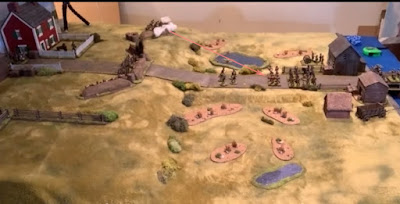 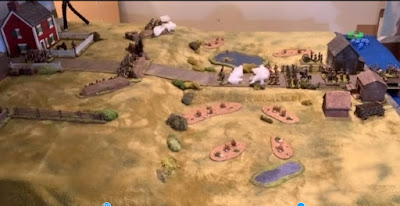 In the approach up the causeway, the lights take heavy casualties and are disordered. 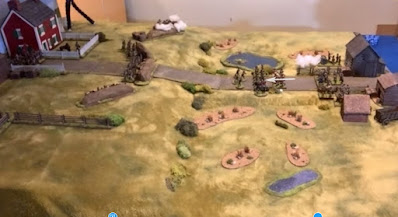 The grenadiers are brought forward to brush the Rebels aside.  This should be easy. 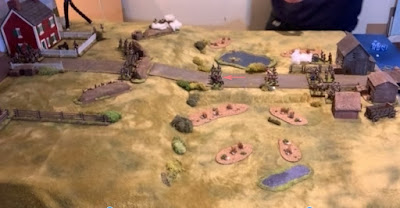 The victorious and confident grenadiers march up the slope toward the barricades.

Not so fast!  Scattering the American picket clears fire lanes from both militia. Taking heavy casualties, the grenadiers turn tail and break for the rear and the safety of the bridge. 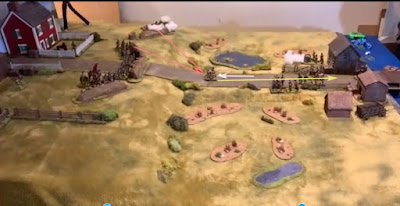 Next, the remnants of the light infantry are pushed forward along the causeway as American reinforcing militia arrive to man the barricades.  Rebel fire sends the lights to the rear as well.  What is left of the British attacking force?  Two units of Loyalists. 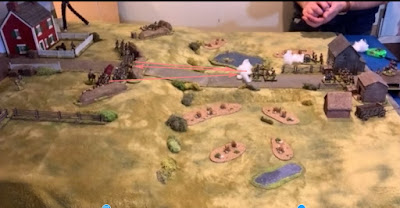 The loyalty of the Loyalists is called into question as they fail to activate, stalled on the causeway.  This pause allows the Rebels an opportunity to pour more fire into their ranks.

Seeing the last Loyalist formation off, the Virginians hop over the barricades and give chase to the fleeing troops.  As in the historical engagement, the British attack is repulsed with heavy losses while the American defenders barely suffer a scratch.  This fight lasted a little longer than the historical action at about 90 minutes.
Even rating the Americans as Green was not enough to offset the disadvantage of launching frontal assaults upon prepared positions.  The British enjoyed two Independent Fire missions from rolling double sixes.  Both of these off-table assets directed against the Culpeper sharpshooters was not enough to silence those pesky and accurate riflemen.  After the battle, discussion on play balance included adding a second unit of British grenadiers into the mix.  Attacking on a narrow front is a very risky proposition especially under R&P rules.  Battle for Great Bridge has potential as an excellent solo exercise since the defenders defend while the attackers can try various tactics to overcome the odds.
Be sure to check out Matt’s blog (Battle of Great Bridge) for his perspective on the battle and some better photos.
Next up in the series:  Battles for Long Island.
Posted by Jonathan Freitag at 12:00 AM