Bring Up the Guns 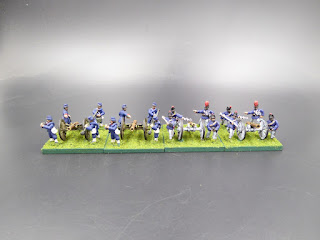 After pumping out nearly 25 units for the 1859 project in 2019, this project has not seen much activity at the painting desk in 2020.  Besides the four artillery pieces and crew mustering out today, only two battalions of Austrian infantry have emerged from the production line in 2020.  Why the dearth of units for the 1859 project?  Perhaps I have enough combatants to call to arms for the size of game I envision?  Perhaps other projects have bubbled up higher into the painting queue?  Perhaps I simply have lost focus? 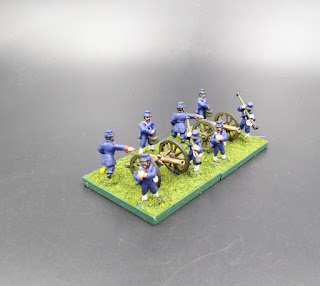 Whatever the real reason for little activity in the 2020, the project sees a small addition with the bringing up of four guns and crew.  Two guns join the French army and two guns move out to join the Sardinian army.  Guns are Freikorps 15s' pieces.  The artillerymen are Lancashire Games. 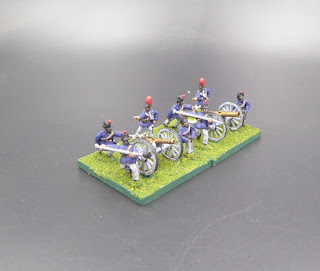 While two French 36-figure regiments are waiting their turn in the painting queue, many other units will see a slap of paint before the Frenchmen see any work.  The queue is long but the toys are patient.  The painting desk likely will see a return to the 18mm SYW project.  One battalion of Bavarian infantry and two Russian guns are in work and will muster out soon.

After the SYW units take front and center at the photo booth, the first arrivals of a planned Hittite army will emerge from the workbench.  My 2020 goal included beginning a Hittite army and completing a dozen BMUs before year-end.  We will see how I do.  My confidence is high.
Posted by Jonathan Freitag at 12:00 AM