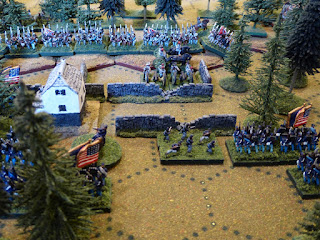 Early on the morning of September 14, 1862, Pleasonton's Federal cavalry division began probing Fox's Gap.  The only Confederate resistance was offered by Rosser's 5th VA cavalry and Pelham's two gun section.  Had Pleasonton pressed on, the Gap may have been his.  Instead, his troopers dismounted along the Old Sharpsburg Road and sent for help. 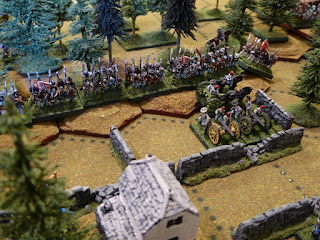 Federal help arrived in the form of Scammon's Brigade of Cox's Division. In an attempt to outflank the small Rebel force, Scammon sent forward the 23 OH along the mountain road to get onto the ridge. As the 23rd neared the crest line, it found that the Confederates had begun bringing up reinforcements.  Blocking his way to the Ridge Road was Garland's brigade as it filed into the sunken Ridge Road to seize the heights and thwart Federal attempts to pass through Fox's Gap.  Thus opened the early stages of the Battle of Fox's Gap. 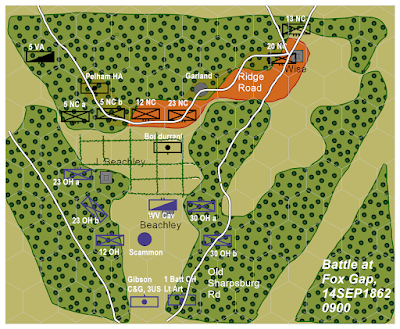 Initial Deployment:
With the exception of USA Division Commander, Cox, all units begin deployed on table as shown in the game map above.  Cox is used as per standard rules governing divisional commanders.  There are no reinforcements.

First Player: Since both combatants were under attack orders, each rolls 1D6 before game begins.  High roll gets choice. 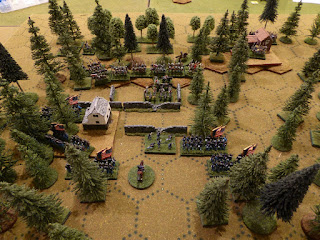 Special Rules:
The CSA has no Division commander in this battle.  Garland acts as both division and brigade commander until he becomes a casualty.  Unlike a typical division commander, Garland remains on the field after each divisional commander action.  If Garland becomes a casualty, only a replacement brigade commander is available.
Pelham's artillery and 5 VA Cavalry are independent of Garland and operate as their own independent brigade.  The Federal West Virginia Cavalry is likewise considered an independent unit.

Historically, the opening stages of the battle represented by this scenario resulted in Federal troops of Scammon's Brigade pushing Garland's Confederates off the Ridge Road and threatening Wise's Farm.  The later arrival of two regiments from Anderson's Brigade at Fox Gap was not enough to counter the momentum of the Federals especially having been reinforced by Crook's Brigade.  Garland fell early in the action and Rutherford B. Hayes (later US President) suffered a wound.

The Fox Gap scenario represents the distilling of my thoughts on this action for play under Two Flags - One Nation.  With a scenario foundation and its constraints in place, time to playtest the scenario.  Keep in mind, Fox Gap is simply an initial draft of the scenario as I stake out a baseline from which to build and refine.  Battle will be fought using Norm's latest addenda of limiting hits when defender claims cover.  With only one brigade per side, keeping one's brigade in command will be a challenge.  The Federals, with the aid of Cox, will have less difficulty keeping their command coordinated than will Garland.  Bondurrant's battery seems deployed a bit too forward at the beginning of battle.  Perhaps up on the Ridge Road would have made a sensible choice?

In theory, the foundation and premise of the scenario appears reasonable and follows the historical situation.  Only multiple playtests will confirm this initial assessment.  Once the early morning scenario produces the desired results, Fox Gap can be expanded to include the later reinforcements of both Crook's Federal brigade and elements of Anderson's Confederate brigade.

Feedback on the scenario is encouraged.
Posted by Jonathan Freitag at 12:00 AM