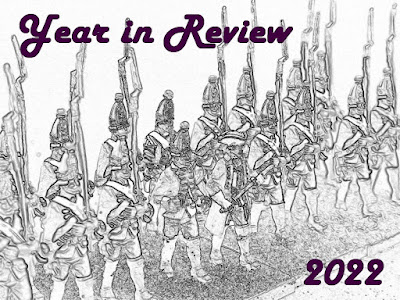 While I did not proclaim a figure count goal for 2022 (I avoided the same pitfall in 2021 too), I expected a total of near 900 figures would be a reasonable objective.  Given an expectation for a continued stream of remote gaming to keep my hobby time occupied, an average of 75 figures painted per month seemed attainable.

Let's see how I did!

When looking at painting production by era, Figure 1 illustrates that SYW and Biblicals did see most of the attention at the painting desk.  The SYW project did see the mustering of a new French Army.  I even got this army into battle more than once.  The Biblicals were concentrated in the Sumerian project.  On the 2021 goals, WotR and Feudal Japan projects also saw gains.  No additions to the Hittites, Egyptians, or Babylonians, though.  Good additions to the 30mm ECW project too.  That was a surprise.

Breaking painting totals down by scale, Figure 2 shows that 15/18mm projects dominated my efforts.  One of the 2022 goals listed above highlighted changing the figure mix from 25mm/28mm to 15mm/18mm.  In this regard, I stuck to plan having 70% of all figures painted falling into the 15/18mm bucket.  Another success!

One goal of time spent at the painting desk is to even out the fluctuations in monthly output.  Figure 3 illustrates that my monthly painting production maintains a seasonal tendency or pattern.  Notice that SYW painting dominates most months' painting output.  I have examined this before (see Seasonality in Painting Production 2020).  Perhaps, I should update this analysis to include the most recent two years of data?

What can I expect on the painting front in 2023?  Where should I spend these efforts?  Below are a few of my thoughts for the New Year:

While there are other projects contending for my time at the painting desk, the list above will help to provide some focus.  This exercise seemed to work well for 2022.  I ticked off a number of the 2022 goals.  2023 looks set to be another year of concentrating on 15mm/18mm projects.  A potential 25mm Trojan War project still lays in wait ready for me to begin.  Maybe 2023 will see the start of this project?

What are your painting plans for 2023?
Posted by Jonathan Freitag at 1:23 PM