Battle of Tell Dapur: A Playtest 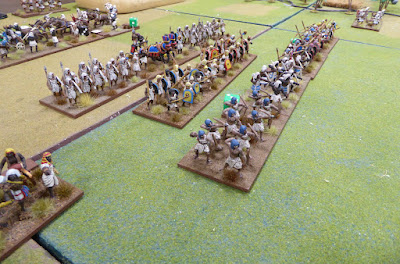 With all of the remote gaming, rules' development, and playtesting conducted during the Tuesday gaming sessions over the last twelve months, Ian decided to toss his development hat into the ring.  Although relatively late to the party, my understanding is that Ian's rules, Rein-Bow Warriors (RBW), have been in various states of development for a number of years.  Now, he has added RBW group playtesting into the fray of his Late Bronze Age rules.

RBW saw its first group outing a couple of weeks ago as Ian hosted a remote game using 6mm figures.  I was unable to attend but Ian made it through his first remote hosting trial undaunted.  To follow up, I offered my 25mm Biblical collections and table to a remote playtest session for Ian and myself on Thursday.  We wanted to further development and work out any kinks before dropping it onto the group as a whole.

What follows is the battle report of my first encounter with RBW.

Ian put together a hypothetical battle between the Hittites and Egyptians near the ancient Tell of Dapur with deployments as,

I translated Ian's deployments (while rotating the battle 180 degrees) into,
With Ian commanding the Hittites and I commanding the Egyptians, on to battle!
Victory to the Egyptians!
This battle provided a very interesting introduction into the design of Ian's RBW.  I have been monitoring game development as he sends out bits of documentation, explanations, graphics, and reference sheets leading up to the game.  Many concepts were foreign to me and I was not sure what to expect.  After a few turns of maneuvering chariots and combat, game design and application began to gel.  An enjoyable playtest and a very interesting perspective of Late Bronze Age warfare.  Oh, and while my figures are not based in accordance with rules' specifications, my basing scheme worked fine.
Ian and I have a second playtest scheduled for Monday to reinforce changes made during this game.  On Tuesday, we host this battle for the weekly, remote gaming group.
Thank you, Ian, for a very enjoyable five hour gaming session!
Posted by Jonathan Freitag at 8:30 AM