Painting activity in November and December seems to have focused on the Assyrian Wars project in 25mm. Today's output backs up that notion. 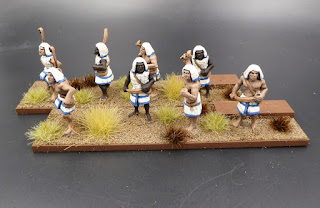 Off the painting desk today are two stands of Egyptian slingers based as skirmishers per Impetvs guidelines.  Figures are BTD from their excellent Egyptian range.  With their simple attire, an Egyptian Army can be brought into service very quickly.  Surprisingly quickly, really.  Although my plan was to field only a few Egyptian units, my tendency to over-buy during BTD sales led to a small pile of Egyptians.  Looking at the mix of Egyptians purchased, it is clear that there was not much method or foresight into my acquisitions. 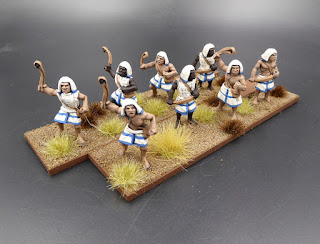 A late fall surge in Biblicals crossing the painting desk has produced ten units for the gaming table.  Half of these stands are Egyptians.  Two more stands of Egyptians are in the pipeline including one more chariot.  Certainly not enough units to field an Egyptian Army on my own but enough to augment Jake's Egyptians.  With a grid in place and To the Strongest! in hand, perhaps, the Assyrians Wars collection will see action in the not too distant future?
Posted by Jonathan Freitag at 12:00 AM