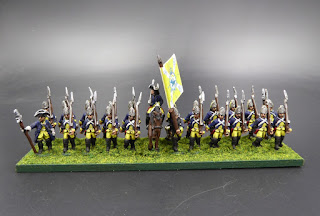 The Prussian build up continues with a second 23 figure battalion mustering up from The Lead Pile.  The sister battalion of Prussian Fusilier Regiment #39 marches into the storage box to join her mate.  Like the battalion#1 before, the second battalion calls up Blue Moon foot led by an Eureka mounted colonel.  This battalion of the 39th carries the regimental color. 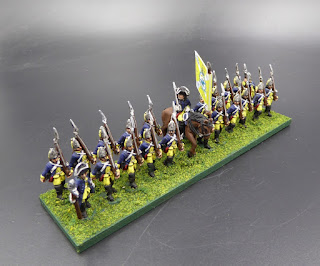 Looking over the Zorndorf OB, the Prussians could use a few squadrons of hussars. Next off the painting desk for the 18mm SYW project will be a dozen Prussian hussars from Zieten's regiment.

Before the hussars can muster off the painting desk, a demi-brigade of French line infantry (39 figures) for the 1799 project will next emerge from the workbench.  Several other BMUs are in work too so expect more units filing off from the painting desk in the coming weeks.
Posted by Jonathan Freitag at 12:00 AM