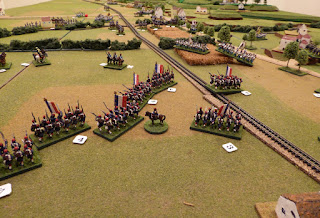 Having experienced a close result in Game 2, Jake and I held another Friday Night At The Fights on March 3 to give Montebello 1859 another go.  With a draw in Game 2 and each player having a renewed interest in tackling the problems faced by both commanders, the game was reset and player commands remained as in Game 2.  That is, Jake commanded the French and I commanded the Austrians.  To see Jake's revised plan for approaching the task at hand, please see Operation Design Montebello Part Deux.

On to the game!
As commander of the Austrian forces, this scrap was a real nail-biter.  Austrian casualties were heavy and while The White Menace bent, it never broke.  French battle plan to strike deep into the Austrian rear while simply cordoning and bypassing Genestrello and Montebello paid dividends exposing the Austrians to a few near embarrassing moments.  With Austrian reserves nearby, the impudent Sardinian cavalry could not hold their gains without infantry support.  In the end, both Genestrello and Montebello fell to French aggressions and Forey claimed a minor victory on points.

With two FtF battles in the books within one week, the rules are surviving contact nicely.  As Austrian commander, I forgot to include the large battalion modifier during fire but that may not have made much difference in overall play.   A few tweaks will be put in place prior to the next game but most remain as is.  Next game?  Yes, we plan to fight Montebello one more time with commands reversed.  I bet Jake will not forget Austrian large battalion modifiers!  One tweak to the scenario: Austrians may activate all three wings once enemy forces have crossed the Coppa.  In the prior games, Austrians could only activate two of their three wings on any given turn.

Can I better Jake's result as French commander?  We will see.
Posted by Jonathan Freitag at 7:00 AM