Return of the Hittites 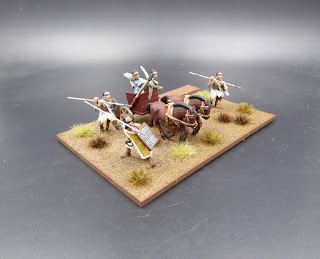 When I finished my 2020 goal of a dozen unit Hittite Army in June (see Hittites The Gathering) , I figured that was good enough and job done.  Twelve units would be sufficient to field a basic army for Basic Impetvs, Impetvs, or To The Strongest!.  Having completed this task ahead of schedule, some readers suggested that I should press on and field another half-dozen units before the year was out.  After all, I finished twelve units in six months, six units in six months should pose little challenge.  Right?
Right.
Off the painting desk today is the first of these reinforcements for the Hittite Army.  Mustering out is a bow-armed, light chariot with two crew and three runners.  Figures are all Wargames Foundry. 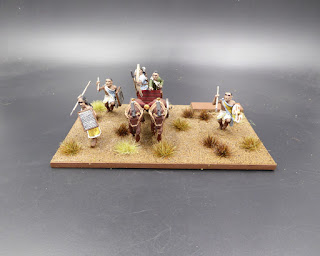 While third quarter winds down, planning for fourth quarter painting push to close out the year is under consideration.  Seems that 25mm/28mm has seen more than its share of focus at the painting desk, thus far.  In an attempt to rebalance my efforts, the tentative plan includes switching from a focus on 25mm/28mm projects to the 15mm/18mm projects.  Of course, the Hittites will continue passing across the painting desk until a further six are finished.  Hopefully, the 1799, 1859, and SYW projects will experience increased production as year-end approaches.  Have I mentioned that the 18mm SYW project may see a new army project undertaken?
I received the survey results from the 2020 edition of WSS' Great Wargaming Survey.  Expect a series of analyses digging deeper into the survey data over the next several months.  Data explorations will be similar to results seen in the 2019 battery of analyses but some new twists too including the introduction of a few new questions.  With luck, an interesting revelation or two will fall out of these analyses.
To close, the West is in flames due to wild fires.  By Saturday afternoon, air quality was in the Hazardous classification.  A thick smoke hung over the region, heavy with the smell of burning brush and timber.  One small town about 40 miles away burned to the ground this past week.  Now, we not only wear face masks to protect from COVID but to prevent smoke inhalation.  Sigh.  What a year.
Posted by Jonathan Freitag at 12:00 AM