On the gaming front this week, gaming opportunities abound.  Four games are on the docket this week with games on Sunday, Monday, Tuesday, and Saturday.  Busy, busy week!  The first three games were all played remotely.  The game on Saturday will see a F2F activity.  Not sure if I actually will have time and the stamina to attend the Saturday game but there is hope.  Let's recap.

After a long hiatus on the Basic Impetvs On A Grid, Reconquista front, Matt returns with another interesting battle for us.  This time, we explore the Battle of Ucles in 1108.  Matt provided a brief battle account to set the stage.

Christian’s are outnumbered but have all the heavy knights. Historically they rashly charged in, pushed the Córdobans back but then got surrounded and where pretty much wiped out. You have two commanders Alvar who is in charge but Sancho Alfonsez who is the kings son. The Almoravids will get an extra victory point if Alfonso is killed.

Matt would command the Almoravids while I commanded the Christians. I provide a brief battle account.  While my pictorial is sourced from captured screenshots, I expect Matt will provide a more detailed and photo-centric account soon.  My Christian army is in the foreground, closest to the camera.  Off we go!

What appeared as a path to an easy Christian success early in the battle, the Almoravids turned the battle around and made the outcome close.  While the pursuing knights doddled in the enemy camp, the Almoravids nearly snatched victory from the jaws of defeat.  Very Close.  Excellent game and the rules worked well after we cleared cobwebs off of the QRS and our recollections.  Great fun!
Edit: Matt's battle account with close-up photos can be found here.

Monday's game was a seven-player, remote contest where I hosted the Rejects in a large, nearly five-hour session.  Since the battle is still in progress with Session #2 scheduled for next Monday, no battle report yet.  Until then, a teaser showing the French Guard attacking the villages southwest of Solferino. 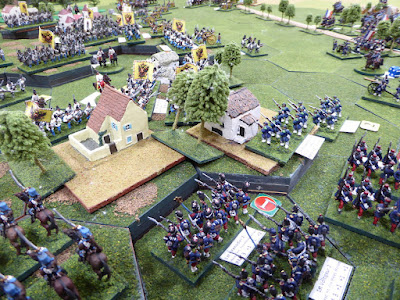 After little more than a one-year hiatus from Graham's development work on his WSS project, the rules and Graham's newly painted Bavarians see action on the table.  The game was a hybrid in that two players were onsite and playing F2F while Ian and I were remote commanding from afar.  I am almost certain Graham will follow Tuesday's action with a full battle account.  For now, a screenshot from the game showing my victorious British wing encircling the enemy breastworks and routing enemy cavalry.

Edit:  Like clockwork, Graham's battle report can be found here. 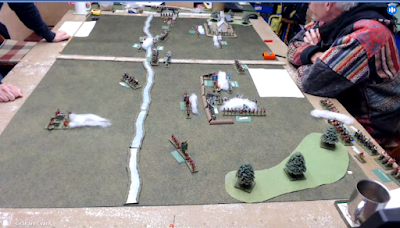 Whew!  Needless to say, little activity at the painting desk this week.
Finally, there are still a couple days to enter the Ten Year Blog Anniversary contest.  Details on entry are at:
Ten Years Before the Screen
Posted by Jonathan Freitag at 5:26 AM