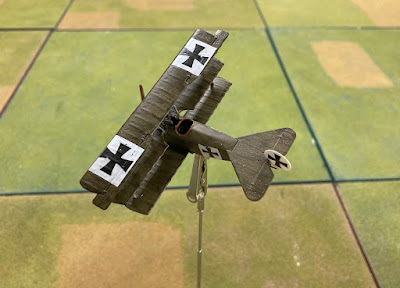 For Tuesday's weekly remote game, Richard hosted a return to the skies over the war-torn landscapes of WWI.  Once again, I reprise my role as Ace Rittmeister von Freitag as the outnumbered German patrol attempts to intercept a larger British sortie.  Rumors quickly drift down to German command that a flight of four allied aircraft are flying over German lines.  The mission seems to be focused on the rescue of downed Allied pilots, lost in previous missions.  Regardless of the allied mission, the German mission is to stop these intruders.  As von Freitag lifts off from the airfield in his DR1 Triplane with his two wingmen flying DV Albatrosses, let's see how the action unfolds. 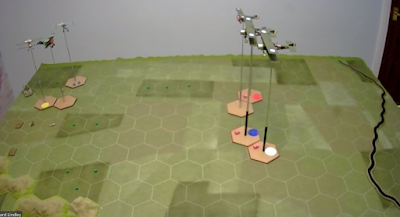 With a flight of four Allied aircraft coming into view, von Freitag's squadron prepares for action.  The enemy are flying a pup, a camel, and two strutter two-seaters.  On the ground, can be seen two planes.  German infantry are advancing toward these aircraft. 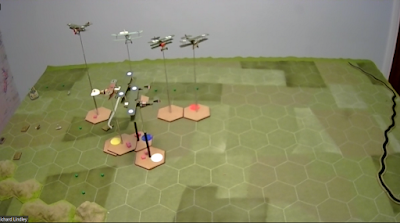 Von Freitag pounces upon the pup as the enemy plane banks hard left to evade the German squadron.  The triplane puts a burst into the pup as tracers fly into the wing. 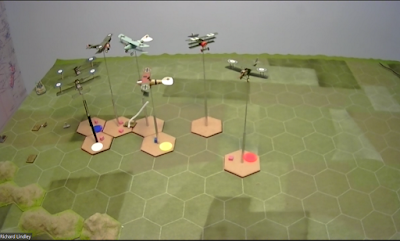 The pup tries to evade but the triplane keeps the pup in its gunsights.  Another burst goes into the enemy plane.  The two strutters are beginning a slow descending circle over the downed aircraft.  A flare goes up signaling the location of the downed enemy pilot. The two Albatrosses close in on the strutters and deliver a few long range bursts.  Neither strutter is carrying an observer!  This must be a rescue mission. 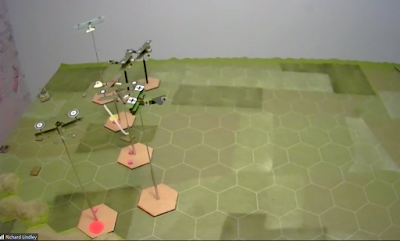 While the two strutters fly in tandem, both descend to a very low level.  Are they planning to land?  The pup cannot shake von Freitag and the German ace puts two more bursts into the pup.  The pup's wing disintegrates and the plane crashes to earth.  Kill #6 for von Freitag! 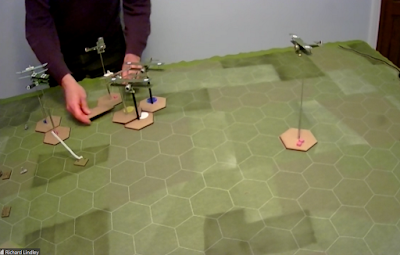 Seeing the enemy go down, Freitag sets his sight on the camel in the distance.  Let the wingmen take care of the strutters, the ace goes after the camel.  On the horizon, another pup is seen approaching the dogfight as the strutters prepare to set down in the field. 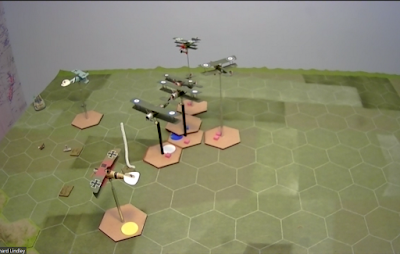 As the triplane swings around to get into a tailing position on the camel, the pup dives onto the triplane and sends a long burst into the ace's craft.  Structurally weakened from enemy fire, the ace watches helplessly as a freak accident causes the upper wing on his triplane to bend and then tear away.  My God! The upper wing is gone! 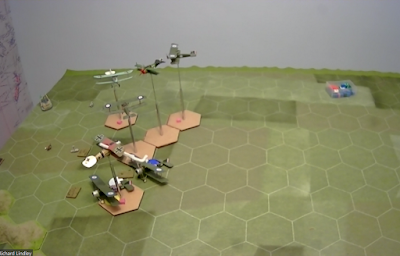 With the pup still on his tail, the hunter has become the hunted!  Is this effort focused on avenging the death of his comrade? 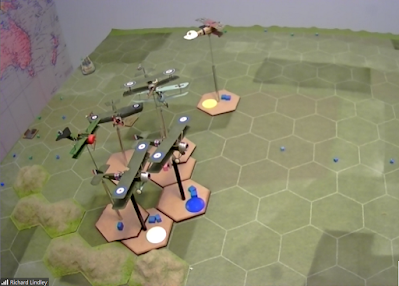 With both the camel and pup on his tail, von Freitag skirts the mountain and comes up behind the strutters as they lift off.  The observer seats are now occupied in both crafts and they begin manning their guns.  This is a congested and complicated situation.  Where are Freitag's wingmen? 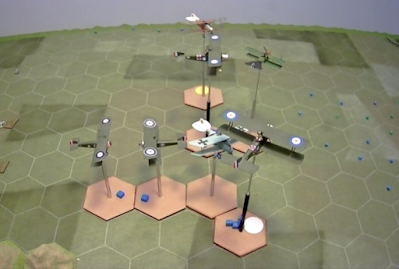 Flying passed the two strutters, the ace puts himself into a dangerous position.  Both strutters are pouring bursts into the triplane.  Besides missing the upper wing, the ace's airplane is taking a lot of damage. 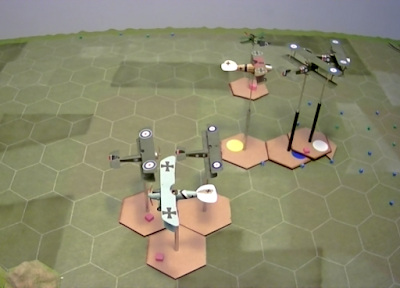 Von Freitag banks hard left hoping to evade his pursuers.  The ploy works!  The strutters break off and head toward allied lines. 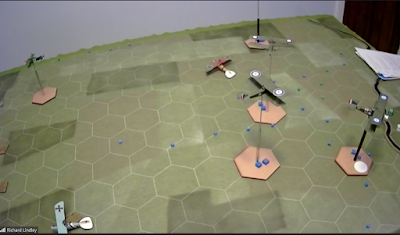 Unfortunately, not before the allies manage to force both albatrosses down to the ground.  Von Freitag limps back toward base while his wingmen have successfully set their planes down without serious injuries to themselves.
The Germans picked up two kills but this was another hard day at the office, for sure.
Friday sees another playtest of Rein-Bow Warriors with the Egyptians and Hittites locking horns once again.
Posted by Jonathan Freitag at 4:00 PM