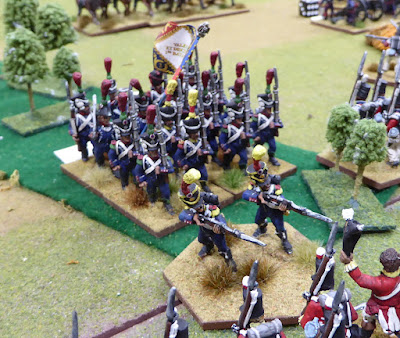 After Sunday's Maida fight against Matt (see: Rock of Maida), I returned units to their starting positions and prepared to host a refight.

The second battle was fought on Tuesday with the remote UK group.  Hard to believe that I have been participating in remote games for more than one year now with these fine fellows.

At game time, I had six players online.  The quick of hand grabbed the three British commanders.  Graham volunteered to take a French commander.  The remaining two French slots were filled by default.

The players and commands were:

French
With players assigned, the battle could begin.
First, a word about this battle report.  Unlike many of the games I host, I try to take game photos at regular intervals and at key moments of battle.  Umpiring six players in this game, I found myself caught up in the action with moving troops and adjudicating results, nonstop.  I am afraid that I was so busy in game coordination that I did not capture as many photos as usual at the critical time.  With what I have, I try to recreate a coherent narrative.  For another battle perspective, visit Graham's report at I might have Maida mistake.
Anyway, off we go!
As Reynier orders a general advance, Compere's 1st Legere uncover the Corsican Rangers lurking in the scrub along the Lamato River.  Those enemy light troops must be dealt with to secure the French left before the attack goes in against Kempt's Combined Light Infantry Battalion.
As the 1/1 Legere wheels left to address the threat in the scrub, the 42nd Ligne advances toward Kempt.  Within moments, artillery fire from a four-pound section crashes into the 2/42 sending it reeling back to its starting line.  Not an encouraging omen to the start of the French attack.
In the center, Peyri's Brigade of foreigners steps off toward the British line.  On the right, Digonet repositions the 23rd Legere as his artillery opens up.  All of Reynier's artillery (four guns) and cavalry are placed within Digonet's Brigade out on the French right.  Does Reynier plan to hammer the right to turn the British left?
Not content to allow the battle to come to him, Cole on the British left advances 1/27th Foot and the Combined Grenadiers.  His two guns limber up and move to keep pace with the advance.  With his flank secured by the 20th Foot firmly ensconced in the scrub, Cole marches boldly forward.  Cole expects Acland to move up as well to cover his right linking his own brigade in a continuous line to Kempt positioned against the Lamato.  Nervous of the cavalry facing him, the 1/27th forms into square.
Back on the French left, with Compere leading the way, 1/1 Legere gives a volley and then storms across the Lamato River crashing into the Corsicans.  The Corsicans do not give ground easily.  What was planned to bring about a quick brushing aside of the rangers devolves into a protracted firefight among the scrub along the Lamato.  Casualties mount.
Digonet attacks!  Sending 2/23rd Legere in against the 20th Foot who were content holding the scrub line on the British left, the two formations collide.  To its left, 1/23rd Legere attacks Cole's guns. Taking the guns but at great cost, the 1/23rd falls back to regroup.
With the 1/27th Foot in square, Digonet's four guns open up and pound the densely packed infantrymen until they can take no more.  The 1/27th breaks!  Seeing the 1/27th break for the rear and passing through the ranks of the Combined Grenadiers, the 9th Chasseurs charge.  Having little regard for forming square, the grenadiers let loose a volley into the hard-charging cavalry.  Undaunted, the chasseurs press on.  In the chaos, of intermixed combat, losses are high.  Still, the grenadiers remain firm and drive off the chasseurs.
In the center, Acland moves up to plug the gap between Kempt and Cole.  Peyri marches on toward the British line with the Swiss and one Polish battalion in line supported by the second Pole in column.
Back on the French left, the 1/1 Legere evicts the Corsicans from the scrub along the Lamato.  The Corsicans have seen enough.  They retire quickly toward safety.  Having recovered from its earlier, unplanned retirement, 2/42 returns to battle.  With its sister battalion drawn up on its left, the 42nd advances under heavy artillery fire.
Going in against Kempt's light infantry, the 1/42nd takes horrific casualties.  The 2/42 is faring not much better.  The British gunners keep up a steady fire as chunks are taken out of the 2/42nd.  Can the 42nd reach the British lines?  No!  The 2/42nd breaks, carrying the already wavering 1/42nd along with it.  The regiment is in flight to the rear!
Seeing the 42nd turn tail and run after enduring sustained volleys, Kempt orders the lights to give chase.  They obey and off they go in pursuit.  The only obstacle in their way is the 2/1st Legere.
Returning to the action in the center, Peyri continues his attack with his foreign troops.  Of dubious quality, the Poles advance upon Acland's equally suspect troops.  Peyri's Swiss take a stab at capturing the second British gun section of the day but are repulsed with heavy, very heavy losses.  The Swiss, while gallant, are likely done for the day.  Reynier joins the Swiss to rally them.
Shifting back to the left, the 1st Legere, having dispatched the Corsicans, turn attention to Kempt's Lights.  With 1/1st Legere in its rear and the 2/1st Legere to its front, can Kempt extricate himself from this vise?
We will never know.  With the hour getting late, we concluded the game to the agreement of all.  The French players figured their attack had just about run out of steam.  While opportunities may still present themselves, the French conceded that they were likely beaten.
Losses were lighter than in the previous Maida battle.  At the end of battle, each army had only lost two units.  Many of the French units remaining on table, though, were in tatters.  Those wavering units, to see action, would require time to regroup.
Coordinating a large, remote game with six players, all having active and meaningful commands can be a challenge.  Certainly, well worth the effort and I enjoyed the game immensely.
I made it with six players, the hard way, and loved every minute of it.  Perhaps, I captured more photos than I thought?
On that note, I hope readers enjoy this battle report and I wish everyone Happy Holidays and a 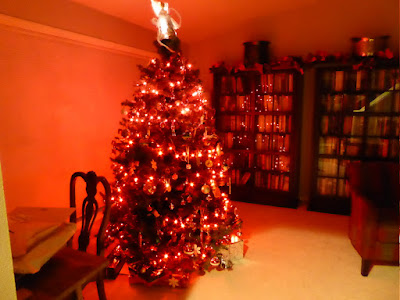 Merry Christmas!
Posted by Jonathan Freitag at 4:05 AM