Zorndorf: A Tale of Two Battles

The first of likely several 260th anniversary Battles of Zorndorf is in the history books.  Fighting the battle as a four player game with two players per side worked well.  No one seemed overwhelmed with the number of troops under command nor did players spend a lot time watching idly.  Kevin and Scott commanded the Prussians while Jake and I took charge of the Russians.

Initial troop positions are illustrated on the photo below viewed from behind and above the Prussian lines:
A view from the east looking down the length of the twelve foot table, provides a sense of scope of battle.  Twelve feet of 18mm figures is a splendid sight.  Most of the following photos are taken from behind the Russian lines or from the east.
The battle began with a cannonade of counter-battery as each side sought to soften the opposition before stepping off on the march to close.  The Prussians began with an artillery advantage both in number of guns and in massed guns. Counter battery at long range is not that effective given guns under fire may remove two hits per turn if beyond 30cm from the enemy.  Even with massed Prussian batteries in the artillery duel, the Russian guns remained firm.
Finally under the impression that the Russian guns had been softened up enough, the Prussian army stepped into action.  While Frederick on the Prussian left carefully maneuvered his troops, Dohna in the center, stepped off with his large brigade and advanced under the cover of the intervening Stein Busch.
Advancing with open flanks, Dohna entered the woods and began the difficult and time-consuming task of moving close order infantry through the dense vegetation.
With Dohna's brigade safely concealed in the woods, the Prussian commander of the Prussian right (Scott) seemed confident.  Would that confidence last?
While Dohna's brigade huddled in the woods, artillery counter-battery continued all along the front. As casualties mounted in the Prussian center, Frederick is encouraged by Dohna to apply pressure on the Russian right.
Frederick obliges by setting Manteuffel's grenadiers towards the enemy.  As the grenadiers marched steadily towards the Russian First Line, support materialized to his left in the form of Seydlitz and his cavalry.  Manteuffel will not face the Russians alone. 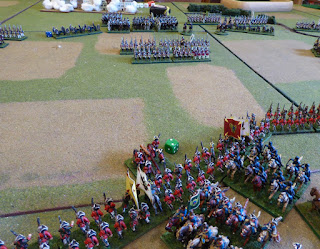 Seeing several Russian batteries withdraw from the First Line due to casualties, Seydlitz struck.  In a daring (some would argue brash) attack, Seydlitz launched his heavy cavalry down the steep banks of the Zabern-Grund and up the other side.  When Seydlitz' cuirassiers crested the grund, they faced lines of Russians in good order supported by guns that had not withdrawn from the sustained bombardment. 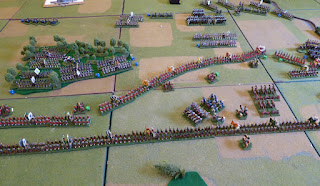 As Seydlitz' heavies closed upon the Russians, one cavalry regiment took heavy casualties and withdrew.  The second regiment continued on into the awaiting Russians and was badly handled before routing.  Despite witnessing the partial destruction of Seydlitz's cavalry, Manteuffel's grenadiers continued the advance. 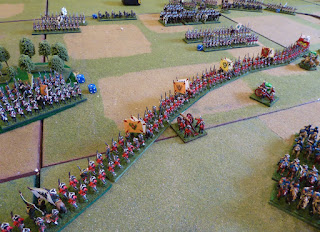 At this point in the battle, Prussian command viewed the situation dire.  With Dohna stuck in the Stein Busch seeing casualties mount from both Russian artillery and musketry and Frederick stymied on the Prussian left, the Prussian announced that a Russian victory was almost certainly assured.  The Russian position seemed unassailable.  The Russians remarked the battle was far from over and we should play on.  With those prognostications, a truce for lunch was declared.

After lunch, Prussian morale improved enough to fight on.  That they did!

The attack on the Russian right picked up where it left off before lunch.  As the Prussian grenadiers of Manteuffel closed with Saltykov's First Line, Saltykov responded by swinging his line forward to meet the oncoming Russians.  A combination of long range artillery bombardment and close range musketry softened the Russian First Line considerably.  Russian guns and troops were withdrawing from the First Line including the scattering of several Russian regiments.  In minutes, the Russian right looked to be nearing a breach by the Prussians.
To plug the gap in the Russian line, cavalry were sent forward while Seydlitz countered by trying an outflanking maneuver on the Russian line.
Having seen his First Line waver, Fermor abandoned the field and his army.  Wasting no time, Saltkov assumed command and encouraged the Observation Corps, thus far content to remain on the defensive, to get into the action.  Brown's Observation Corps obeyed Saltykov's directive and lurched into action.  He will move up to threaten the flank of Dohna's brigade isolated in the woods.
While Browne advanced on Dohna, Demiku's cavalry pitched back into Schorlemmer's Right Wing cavalry.  Again, the Russian cavalry held their own against superior troops but a regiment of hussars was lost in the clash.  Demiku's aggressiveness worked to keep Brown's infantry from harassment by Prussian cavalry.
At this point, units lost are about even although the Russian right suffered more than they can gave.  In the center, Dohna and Saltykov pounded away at each other as a couple of Dohna's regiments advanced out of the woods to meet the new threat from Browne's Observation Corps.
Back on the Russian right, Saltykov's right flank, now reeling, fell back as the Second line of Galytsin tried to move up.  The Russian right wavered under the combination of artillery and superior firepower of the Prussian grenadiers.
While the Russian right attempted to stabilize, the Russian left continued applying more pressure.  Browne pressed forward against Dohna while Demiku charged back into the Prussian RW cavalry.  The Left Wing artillery repositioned two batteries to better support both Demiku's cavalry and Browne's infantry.
The combination of Prussian artillery and superb Prussian musketry was too great an advantage against Browne's Observation Corps.  One regiment seemed to disappear each turn as cannon and musketry brought down huge swaths of red clad Russians.
Even with Dohna's Prussian infantry suffering from each fusillade, they held their ground while Russians were mowed down.  Casualties among the Observation Corps were staggering.  The inferior musketry of the Russians was no match for the disciplined volleys of the Prussians.
Back on the Russian right, the Prussians closed in for another assault.  Casualties were high for the Prussians but they pressed on.  Both sides suffered heavy casualties as the Russian line continued to thin.  The location of the Russian baggage park prevented the Second Line from efficiently taking over from the First Line.
As the Russian right devolved into close range exchanges of musketry, Seydlitz made his presence felt once more.  Coming up out of the grund, he struck a grenadier regiment, unable to turn to face this threat, in flank.  Although Russian guns belched out destruction and stopped one heavy cavalry regiment, the second regiment of heavies scattered the grenadiers and turned the Russian right.
With that effort, the Russians have had enough.  Saltykov ordered a retreat to save what he can of the Russian army. A glorious victory for the Prussians!
With the Prussians on the verge of quitting the field in the morning, a turn-about in the afternoon heard them roar like a lion.  Long range artillery coupled with accurate musketry won the day.  Having first fire on most game turns proved important over the course of battle.  Final count of lost units was 11 for the Russians to 5 for the Prussians. The Russian left took a beating once they engaged with the Prussians.  Most of Browne's command had quit the field by afternoon.

This proved to be an entertaining first outing for Jake's newly raised Russian army and we are likely to see Zorndorf tackled at least a time or two more before passing on to another battle.  A few scenario modifications are under consideration for the next clash but nothing too drastic, for sure.

Congratulations to Kevin and Scott in their Prussian victory.  Well played guys!
Posted by Jonathan Freitag at 12:00 AM