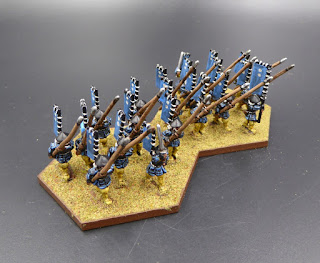 It has been a very long time since any 15mm Feudal Japanese figures have passed across the painting desk.  Better late than never, right?  The collection has not seen any tabletop action in an even longer period of time.  What motivated me to push these into the painting queue now?  I really cannot say.  The packs caught my eye on a recent rummage through The Lead Pile.  Often that is the only trigger needed to snap into action. 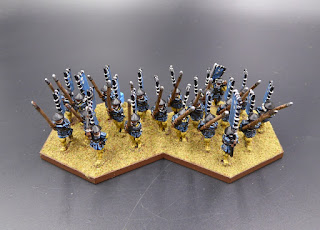 Off the painting desk is the first of two Ashigaru spear units.  Figures are from Peter Pig's excellent Feudal Japan Samurai range.  Like most of the Samurai and Ashigaru figures from Peter Pig, the sashimono is cast onto the figure.  A detail I quite like.  No fiddling around to attach a banner to figure.  Even with a simple and stylistic clan emblem, the figures stand out on the gaming table. 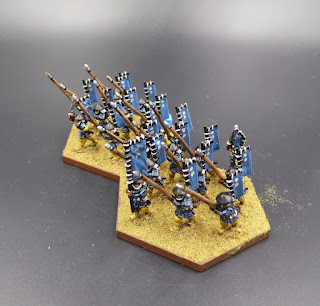 While the figures have not seen action on the gaming table recently, I enjoyed games using both Samurai Battles and Impetvs with the armies mustered.  Using Impetvs, both gridded and non-gridded versions have been tried.  Modifying Impetvs to work on a grid produced intriguing results using simple mechanisms to convert from non-grid to grid.  I am reconsidering the gridded approach and working to codify some of the mechanisms developed and tried during those playtests.  My game notes, thus far, have proven elusive.  Perhaps if the figures get back onto the grid, it may all come back.
Posted by Jonathan Freitag at 12:00 AM