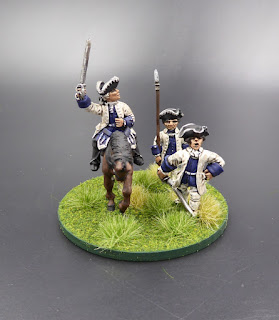 Well!  A project that had not seen action at the painting desk in a very long time.  How long?  Almost exactly three years.  The 25mm French and Indian War collection has remained dormant with no new units being mustered in three years.  For a project having reached maturity and not often getting to the gaming table, long periods between additions is expected. 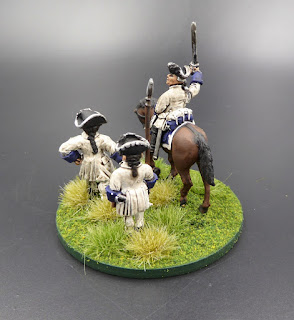 Why now?  Rummaging through The Lead Pile to pull a few odds and ends for the 28mm WWII project, I came across the remnants of the FIW project.  Only one or two handfuls of figures remain unpainted and these are miscellaneous figures with no set purpose for building cohesive units.  There was enough figures to field a French command stand.  One can never have too much command, right?  With only a handful of WWII British and Germans needed to round out their platoons, adding three more figures into this tranche would hardly be noticed.  A quick little diversion. 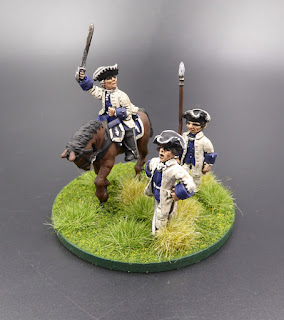 The three figure command stand shown today sources from a mix of manufacturers.  The mounted officer and the foot officer with spontoon are both from Dixon.  The foot officer in front is from 1st Corps.  Nice figures all.

Having mounted this French command on a round base, I am very tempted to go back to the FIW project and remount all of the command on similar round bases.  Previously, command was mounted on the same size rectangular base as the infantry.  While rework, it should not take much time.  Another quick, slightly larger diversion.
Posted by Jonathan Freitag at 9:45 AM