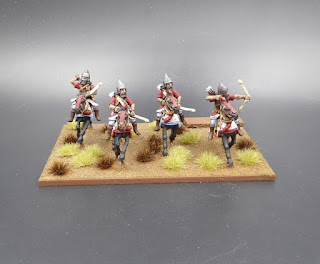 Work on the Assyrian Wars project receives some focused attention.  With no new units added to the project since late August of 2019, the completion of the desert tower (see Desert Guard Tower) in December renewed my interest in fielding more Assyrians.  Add to that a 2020 pledge to field a Hittite Army and it may be no surprise that a number of Assyrians filed into the painting queue.  While painting production has slowed of late, a number of Assyrian units made it off the painting desk before my early January forced hiatus. 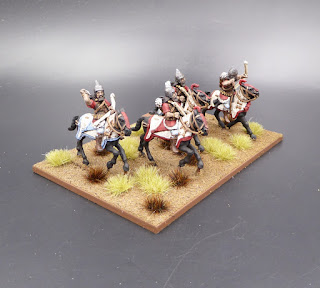 On display today are two units for the project.  The first is a four figure BMU of Assyrian mounted cavalry from Wargames Foundry.  I have painted a half-dozen of these BMUs thus far and each quartet is a pleasure to paint.

The second is a three figure stand of Egyptian mounted scouts also from Wargames Foundry.  With a small Egyptian contingent present for duty, it is time to add a scouting capability to the cavalry-pour Egyptians. 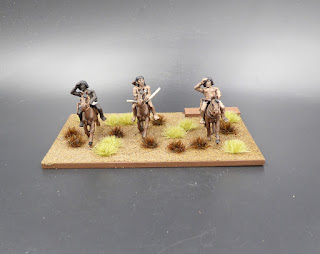 Looking over at the photo box, four infantry units and one chariot are awaiting their turn for a photo session.  About that pledge of fielding a Hittite Army this year, I better get started if I expect to stick to plan and field a dozen units this year.  Pushing a couple of infantry units into the painting queue to begin this project sounds just about right.  Ease into it gently.  First, I need to dig out the figures, clean them up, and then hit them with a coat of primer.  Hittites will be on the painting table soon, very soon.
Posted by Jonathan Freitag at 12:00 AM