On the heels of the two Austrian howitzers, off the painting desk trots three squadrons of Prussian cuirassiers.  These 18 troopers are from Eureka Miniatures' 18mm SYW range and muster out as three squadrons of the 7th Cuirassier Regiment.  With the completion of these horsemen, The Lead Pile is now devoid of Prussian cuirassiers.  A small handful of Prussian dragoons remain.  They will be finding their way into the painting queue shortly. 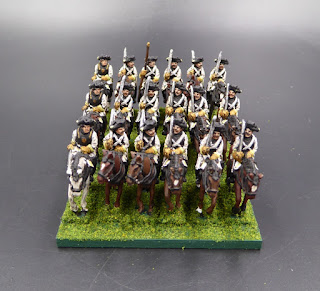 While the next unit off the painting desk will not likely be yet another addition to the SYW project, two more units for this project are in work.  What are likely next out of the gates for the SYW project?  More Russian musketeers.  Before one of the musketeer regiments musters out from the painting production line, a brief return to the Punic Wars project.  One more Celtic warband will depart the painting desk soon.  Another Celtic warband?  Yes, although The Lead Pile has been much depleted of those figures as well.  Perhaps enough Celts remain from the last large Crusader order to put together one more warband.  After that, all Celts will be gone with the exception of a few archers.  All gone, that is, until the long missing BTD order placed in May arrives. 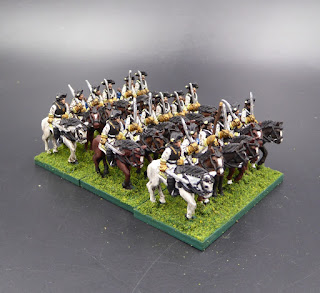 On the boardgaming front, a few games arrived recently both from ebay purchases and direct orders from manufacturers.  Some real promising additions to the boardgame collection that I hope to read, learn, and get onto the table in the near future.  Staying on the boardgame topic, the collection is currently undergoing a slight cull.  Several duplicate copies of some out of print games have been sold off to make shelf space for some new replacements.  Some of these recent acquisitions will be featured later once I have had time to learn and play the games.  As for a theme in these recent purchases, WWII seems to dominate.

For now, the painting desk remains active and the gaming table is buried in assorted gaming detritus.  The ECW battle of Southam still is in residence on one-third of the table awaiting a replay.  A Spanish-American War boardgame occupies one-sixth of the table.  The remainder is stacked with boxes, books, and a scattering of rules.  It may be time for a clean up.
Posted by Jonathan Freitag at 12:00 AM