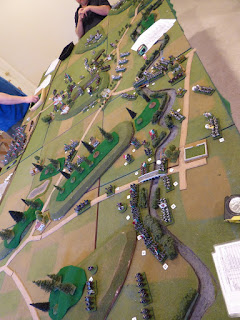 As scenario designer, one anticipates how the scenario is likely to play out.  When drafting an historical scenario, an attempt must be made to allow for the possibility of reproducing the historical outcome.  Overfitting a design to a specific battle account should yield to a broader narrative within the confines of the rules, scenario, and historical situation such that the historical outcome is possible but not guaranteed.  Objectives are set to help in guiding that narrative.  The translation from concept to reality is sometimes very different.  Luck plays a role in the scenario's outcome as do the actions and reactions of the players.  Sometimes, other factors, altogether, conspire to change the outcome.  Warfare leads to uncertainty.  The first run-through of the San Martino scenario is a case in point.

The San Martino scenario is large.  With two players committed to participate, a two-player game would provide a lot of troops under each individual's command.  Too many troops to command?  Perhaps, but feasible.  I would act as umpire.  As often happens, I was convinced to take an active player role in the game.  I took command of the two reinforcing Austrian V Corps brigades entering on the south edge of the table.  With most objectives concentrated around San Martino, this small secondary command would likely not be the primary focus of the action.  Wrong!

The battle began as expected with the Sardinians under Mollard skirmishing with lead elements of Benedek's Austrian Corps for control of the San Martino Heights.  Rather than strike hard against Mollard's recon column, Benedek committed few troops to this action.  Throughout the action, Lippert's Austrian brigade fought gingerly over the heights in an attempt to wrest control of the key villages from the Sardinians.
The Sardinians showed more activity than the Austrians and did not waste time.  Upon the arrival of the Cuneo Brigade to San Martino, Mollard directed Arnaldi on his task.  Arnaldi was to deploy his brigade on Mollard's left and relieve pressure on the attacks against San Martino.  Drawing up on Mollard's left also prevented the Austrians from flanking the San Martino position from the east.  The Cuneo Brigade, in position to deploy, fanned out to the left of Mollard.  At this point in the battle, Mollard launched two of Monferrato's light cavalry squadrons to disrupt the Austrian countermove to oppose Arnaldi.  Miraculously, the Sardinian cavalry succeeded beyond expectations in this spoiling attack.  The target of its charge panicked and fled to the rear.  Turning its attention to the closest enemy infantry battalion, these Austrians, likewise, fell back from the attack.  Blown but pleased with their success, the Sardinian troopers returned safely to friendly lines.
In response, Benedek reinforced and extended his right flank while keeping the bulk of his formations in reserve.  These large Austrian formations would remain inert for the entire battle.
On the road from Lonato, Durando's Sardinian division, consisting of two regiments of grenadiers and supporting Bersaglieri and cavalry marched quickly to the south.  Their objective was the bridge spanning the river.  Getting there first provided an opportunity to drive a wedge between Benedek's Corps and the bulk of the Austrian Army busy fighting at Solferino.

Gaal's Austrian V Corps brigade arrived near Madonna del Scoperta and passed through the town.  Gaal's objective was to reach the bridge before Durando's division.  It would be a race against time.  Gaal reached the bridge first but only just.  Durando's Division was deploying along the river banks almost as Gaal entered the town.  The intense firefights pushed many of Gaal's battalions back from the river.
Gaal's small brigade was no match for the power offered from Durando's grenadiers.  Even armed with rifles against the Sardinian smooth bores, the Austrians were outclassed.  Some of this mismatch was not of their doing!
As Sardinian troops from Lonato continued arriving on the battlefield, the Sardinians prepared for an attack against the San Martino Heights from the west.  To counter this threat, Benedek ordered Reichlin's ad hoc brigade to march around the high ground to address this situation.
Reichlin was not alone to respond to the call to arms.  The second V Corps brigade arrived at Madonna del Scoperta and rather than setting up a defensive position to backstop Gaal, Koller's Brigade began crossing the river near Madonna del Scoperta to place his brigade on the north bank of the river.

Without support from Koller, Gaal's brigade was in serious trouble.  As each of Gaals' battalions fell back from the river, confidence rose among Durando's grenadiers.  The time was ripe for an assault across the river.  The Sardinian grenadiers splashed across the water obstacle nearly unhindered and crashed into the already wavering Austrians.  In a few minutes, Gaal's brigade was done for and went streaming back from the field of battle.

While fighting continued over the San Martino Heights, Durando's grenadiers, having crossed to the south bank of the river, were a big concern.  What was Benedek to do?  Release his reserve formations in an attempt to take the heights before more Sardinians arrived or protect his Corps and the Austrian line of communications back to the Mincio River?
With Sardinian reinforcements arriving from the north and the heights threatened from both the north and west, Benedek called for his Corps to disengage from battle.  There would still be a hard fight to hold Pozzolengo long enough to allow the army, defeated at Solferino, to retreat to safety.  Little value in holding San Martino at this point in time.

Leaning over the table and surveying the situation, Benedek declared enough is enough.  Disengage!  To lunch!  The Sardinian Army and King Vittorio Emmaneule II are victorious on this day!
With a concession after two hours of battle, plenty of time remained in the day.  Rather than reset the battle for a second attempt, Commands & Colors Ancients was pulled off the shelf for an afternoon session of gaming.  Good fun!

As for the San Martino battle, a handful of mistakes were made in play.  Having not had the rules out for an exercise in over a year, my memory was a bit foggy.  Even though the rules are of my own design, I forget key facets without regular exercise.  The big mistake in this battle was forgetting that size DOES matter. Austrian infantry battalions are classified as LARGE in size while Sardinian infantry battalions are classed as AVERAGE.  Light infantry half-battalions are classified as SMALL.  The larger Austrian battalions should have been able to give and take more punishment than they did.  Similarly, the half-battalions of light infantry should not have been as effective and suffered losses much more quickly.  Would these changes have affected the final outcome?  Perhaps not.  The battle may have been more closely contested, though.

Expect to see more of San Martino in the future; hopefully, with rules of engagement correctly applied.
Posted by Jonathan Freitag at 12:00 AM