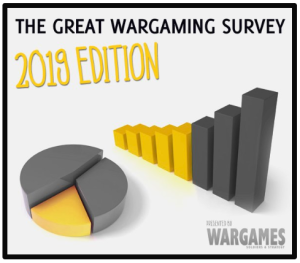 Jasper, of Wargames, Soldiers, and Strategies (WSS), continues presenting results from The Great Wargaming Survey 2019 via the WSS blog.  The latest entry focuses on hobby spending in a brief synopsis of some of the results (see: Take My Money).  In a follow-up post, I dive a bit deeper into the topic focusing on relationships between hobby spending, survey respondent age and primary interest.  For these analyses and conclusions, please read Digging Into the Numbers: Hobby Spending – Age vs Interest on the WSS blog.  Really.  I encourage readers to read the WSS blog post before continuing on so that the following analysis has a better chance of making sense.  Return back here for an expansion of the analysis when finished.

From the analysis presented at the WSS blog, I draw the following inferences, generalizations, and observations on hobby spend with respect to age and primary interest:

Each of these broad observations seem reasonable and hardly revelatory.  Are there any of the above in which to take issue?  I do not, but others may.

The analysis in the post, Digging Into the Numbers: Hobby Spending – Age vs Interest, relied upon counts and descriptive statistics to reach the inferences listed above.  These counts and descriptive statistics published in the WSS blog entry will be used in the following analyses.  Digging a little deeper into the data science toolbox, I will examine the survey data from a correspondence analysis perspective.  The goals in correspondence analysis are twofold:  either discriminate (differentiate) between one or more attributes or associate one or more attributes into similar groupings.  Results can be presented graphically making the analysis quick to digest.

While there are three survey attributes of interest (Hobby Spending, Age Group, and Primary Interest), I begin by examining attribute pairs first before jumping into the three dimensional case using all three attributes at once.

Primary Interest vs Age Group
From this correspondence analysis, two distinct groupings emerge.  One group contains historical wargamers that are age 51 and over.  The second group comprises fantasy/sci-fi wargamers that are 40 and under.  Notice that the "Not specified" primary interest group also falls within this category.  The graphic illustrates a clear separation between the two groups suggesting that the data are highly differentiating on these two attributes.  With their positions close to the origin, "Mixed" and "41-50" show less distinguishing features between the mature historical wargamers and the young fantasy wargamers. 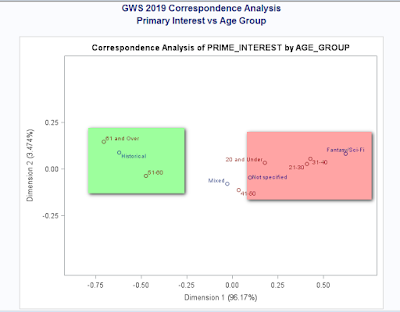 With "20 and Under" and "Not Specified" near the origin and distinctly separated from "Fantasy/Sci-Fi " and 21-40 wargamers, the following alternative classification is reasonable too: 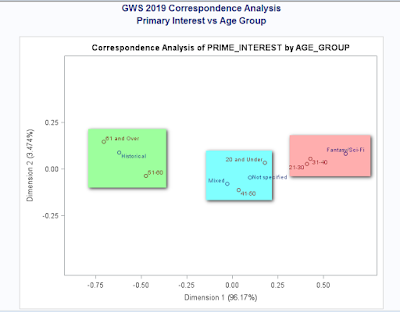 Which is the better classification?  I vote for the latter, three group classification since the "20 and Under" group has very little data.  One point to remember, it is always prudent to verify results against the underlying data. 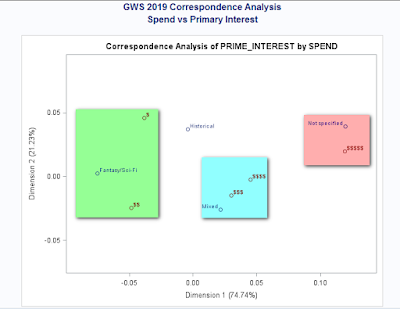 These are interesting results.  Do these groupings make sense intuitively and can they be explained satisfactorily?  I think so although those survey respondents not specifying a primary interest but associated with the highest spending may be a conundrum.  Maybe these are collectors and not wargamers?  Perhaps gamers and not wargamers?  Thoughts?

Spend by Age Group
A graphical representation of spending by age group shows a clear bifurcation into two groups.  The tails of the age distribution (30 and under and 61 and over) are associated with spending modestly on the hobby at no more than USD 700 annually.  The mass of the age distribution tends to spend above USD 700 annually.  Again, the results seem reasonable given the spending propensity of these groups. 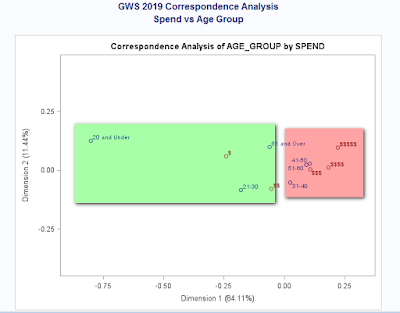 In the MCA graph below, what does the scatter plot of spending, age, and primary interest suggest?  The results may be difficult to interpret or are they? 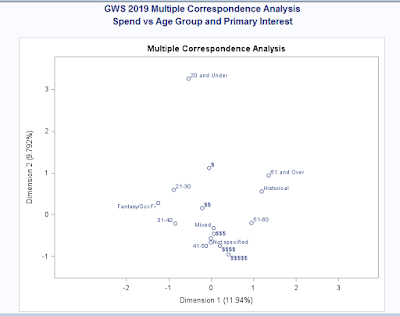 Like correspondence analysis, attributes plotted along the origins exhibit little differentiation.  These less distinctive attributes include '$', 'SSS','Mixed', '41-50', and 'Not Specified.'  After ruling out these attributes that cannot be easily distinguished, each quadrant is examined.  What inferences can be made from each of these quadrants and what labels attached? 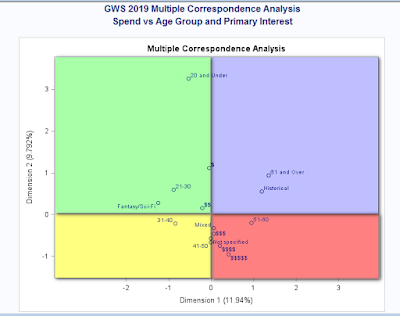 Starting with the blue upper right quadrant and working counterclockwise, these associations can be labeled as:
Of course, these are only the labels I assigned.  Others are equally suitable.  Keep in mind that these are associations and tendencies only.  These are not hard and fast rules.

After making it through this analysis (is anyone still with me?), as a reader, does your wargaming situation fit nicely into one of these associations generated by the Great Wargaming Survey results?  Remember, these are only broad associations and tendencies representing the sample as a whole.  If not, where would you fit?

Does this analysis provide a useful picture of the hobby with respect to spending by age and interest?  For me, yes.  I hope others may find this exercise of interest as well.
Posted by Jonathan Freitag at 12:00 AM