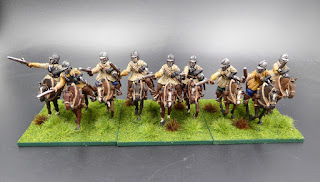 With an ECW game out on the table for an extended period of time, it is not too surprising that the daily presence of Southam in situ might provide inspiration.  That is the situation.  Two more units for the ECW project have found their way into the painting queue. 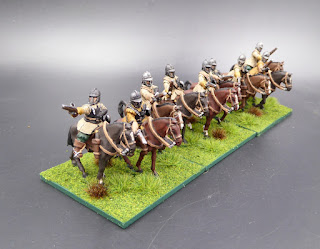 The first of these two units off from the painting desk this morning is a nine figure unit of cavalry, all brandishing pistols.  Figures are from 1st Corps' recent ECW release of cavalry.  Unlike 1st Corps' ancients cavalry purchased many years ago, these fine fellows are much larger for both man and beast.  In fact, these figures fit in well with the larger Redoubt and Renegade which compose the bulk of my 30mm ECW collection. 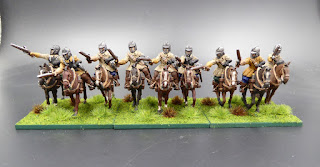 In addition to being larger than some of 1st Corps' earlier ranges, sculpting is excellent.  Both trooper and mount are superbly rendered.  Troopers are two-part.  The weapon and hand are separate from the body with the gauntlet fitting over the outstretched arm stub.  These pistoleers make a useful addition to the cavalry arm of the project.

On the gaming front, Sunday gaming returns to the subcontinent in another bout of Afghans vs the Empire in a repeat clash set during the 1st Afghan War.  The same forces presented in the three earlier match-ups are set to take to the field in a rematch.  With the Natives coming close to victory in two of the three previous contests but still showing 0-3, a search for a winning combination continues.  Rules will remain Commands & Colors: Napoleonics.
Posted by Jonathan Freitag at 4:00 AM