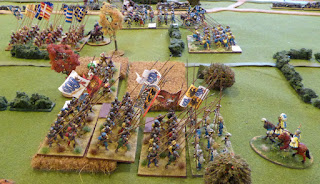 To the Strongest! was put through the paces in a Renaissance game set during the Italian Wars.  This battle was the first outing for my Italian Wars collection and my troops found themselves pitted against an army of Charles V.  I, as Francois I, would take on the command of a French and Allied force to push the foreigners out.

The scenario was developed by Jake (see: Battle of Maisnon for scenario details).  The battle sees two comparable forces face off across open, farm land.  The French left is flanked by a river and lightly wooded hill while the right is hemmed in by heavy woods on a hill.  On the French right, Francois deploys his veteran Gendarmes.  Powerful units that have the potential for great destruction if given a free rein to engage the Spanish horse.  The army of Charles V has an advantage, though.  Two guns are situated on the hills overlooking the battlefield with none for the French.  To close with the enemy, Francois must cross the battlefield in the face of these deadly guns.  Would this imbalance affect the outcome of battle?   We will see.
The battle begins with a general advance by both Charles V and Francois I in an attempt to decide the outcome on their enemy's ground.  The French plan to destroy Charles' Army while taking control of the vital ford over the river.  To win, Charles needs to preserve his army while denying the ford to Francois.

While the two main armies in the center plod towards one another, the cavalry on the wings strike.  Charles' light cavalry on his right flank advance along the west bank of the river and scatter the mounted crossbowmen with little effort.  One hit and the crossbowmen vanish.
On the right, Francois advances his cavalry both heavy and light.  While the light cavalry work its way along the edge of the wooded hills, the Gendarmes and Ordonannce Archers trot straight ahead to threaten the Spanish left.  Without warning, the lead French Gendarme troop charges into an attack on the gun situated on the hill.  The Spanish gun fires to no effect.  With no protection to aid the guns' defense, the French overrun the guns and scatter the crew causing panic among the Spanish troops.  Charles is horrified at the sight of his guns taken out with such seeming ease.
With the destruction of the Spanish guns, the lead Gendarmes find themselves in a precarious situation.  Now, German Men-At-Arms are to their front while their flank is threatened by Doppelsoldners and handgunners.
Charles sets to avenging the loss of his prized gun.  With an exposed flank offered up, the Doppelsoldners turn to allow the Spanish to attack the Gendarmes from two fronts.  Having its commander attached, the Gendarmes, while suffering casualties, heed his commands and fall back to preserve their formation.

Back on the French left, light troops from both armies clash near the ford.  As the pike blocks advance, Spanish missile fire begins to take a toll on the advancing French.  Long range artillery fire begins causing casualties against the left-most pike block while the unhindered Spanish cavalry works its way around the French left.
Having found the range, the Spanish guns on Charles' right continue sending projectiles down range into the deep ranks of the pikemen.  The French pike scatter.  With most of the French light troops cleared out of the way and one Gendarme troop eliminated, Charles' pike blocks advance.  On the French left, the second French pike block is destroyed by a combination of Jinnete flanking attacks and frontal push of pike.  With the Ordonannce Archers maneuvering onto the German MAA's flank, the German cavalry turn to face this new threat.  In the clash of lance and sword, neither can gain the upper hand.
In little time, the French left has completely collapsed.  Mustering strength for one last attack, the Swiss clash in push of pike with the Spanish pikemen.  Even though the Swiss win their individual battle, Francois realizes the battle lost.  With Charles on his flank and front, Francois orders a general withdrawal to save what remains of his army.  Having lost two of his three heavy infantry blocks, Francois seeks cover among his Swiss as the army retires.  Charles V holds the field and the ford.  To take back their country, the French must gather a new army and make preparations to strike again.

While the battle looked close, Charles' missile fire, early on, was instrumental in delivering victory.  Time after time, the Spanish guns scored hits with almost every round.  The hapless French, some in deep formation, failed to stand up to these bombardments when save after save came up short.  The French lost many of their light units to either artillery or arquebus fire.  Those French light troops were one hit wonders.  For Charles, losing the gun at the outset of the battle shook his nerve but he regained composure and launched combined arms attacks against the French left with devastating results.

Many a punch or counter-punch was stopped dead in its tracks due to a frequent turning of an Ace.  These herky-jerky activations seemed much too common in this battle.  These starts and stops led to a number of uncoordinated moves/countermoves as brigades moved then stalled repeatedly or did nothing at all, for no reason at all.  While we, as players, may not be privy to the machinations carried out by our generals down on the field, the view from above ought to at least provide a plausible narrative.  This discontinuity due to frequent, Ace-drawing shocks to the system made seizing and sustaining momentum a difficult task.  Being lucky is better than being good.

Fortunately, time remained for a rematch.  Troops were reset for battle and a second game undertaken.  Will the result be any different in Game 2?  Well, that battle account is for another time.
Posted by Jonathan Freitag at 12:00 AM