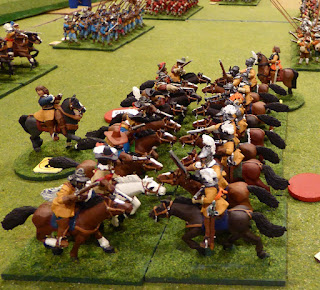 With the background for the Battle of Montgomery laid out in a prior post (see: Battle of Montgomery), I had a rare Friday Night At The Fights session against Jake.  Even more rare, I managed two games within the same week!
The Roundhead's needed to hold Salt Bridge to garner a victory so what does Meldrum do?  He orders a general advance towards the Royalist position on the hill.  Meldrum sympathizers argue that having his forces deployed with their backs up against the unfordable river was untenable and an advance to gain space was a good proposition.
To begin the battle, Meldrum orders Middleton's horse covering the bridge to prevent an advance upon Salt Bridge.  Middleton charges into Ellis' Foote and is sent reeling back to  the bridge following a devastating first volley.  Attacking foote frontally with horse is not advised!

Wasting no time, the Royalist Commander of Horse, Col. Trevor, spurs his horse forward on the left, joins his lead regiment of horse, and launches an attack on Fairfax's closest regiment of horse.  As Trevor approaches, Fairfax countercharges into the oncoming Cavalier horse with a clash midway between the two formations' starting positions.  Being trotters, Fairfax's troopers discharge their pistols at point blank range before drawing their swords.  The short range fire disorders the Royalist horse but does not stop them.    The momentum of the Royalist horse is too much for Fairfax and the Roundhead horse is repulsed in disorder taking more casualties than than it gave.  Its retreat brought the beaten horse into contact with Fairfax's other supporting horse regiment and it is pushed back in disorder.  Fortunately for Fairfax, Trevor is unable to mount a vigorous pursuit.
Commanding the Roundhead foot in the center, Lothian continues his advance towards the Royalist line.  Mainwaring's Foote advances too close to Tillier's Foote and Tillier unleashes a seemingly devastating first volley.
Being of solid resolve, Tillier's fire does no more than disorder Mainwaring.  What, only disorder?  As a note, Lothian's three regiments of Cheshire foot historically showed great courage on this day of battle and are allowed one inspiring rally per game.  In this, the Cheshire foot may ignore one failed Cohesion Test.  My Royalist adversary was quite gentlemanly when such devastating fire resulted in only a disorder.
Seeing no pursuit from Trevor, Fairfax rallies his horse and pitches back into Trevor's horse.  In a repeat of the action only a few moments before, Fairfax is sent reeling back into his supporting horse.  Trevor, again, fails to follow up on his success.  For now.
His own horse weakened from two melees in quick succession, Trevor orders a supporting regiment of horse to cover his right flank in preparation for dealing with the Roundhead horse on the wing.
While the remainder of the battle lines were content to exchange short range musket fire to little effect, Trevor's horse went back into action against Fairfax.  At this point in the battle we remembered that Opportunity Fire was a possible reaction to shooting so fire and counter fire became de rigueur for the remainder of the game.


With escape blocked by the river, Trevor took the opportunity to attack the Royalist horse once again.  Finally in this clash of horseflesh and steel, Trevor prevails and Fairfax's Regiment of Horse is scattered.  Unable to check the pursuit, Trevor's victorious horse hit the remaining Roundhead horse.  Winded and ranks depleted, the Royalist horse are, likewise, scattered.
Having contained the cavalry threat to the Royalist right, Trevor's remaining horse maneuvers to threaten the Roundhead center.  Vaughn's Regiment of Horse moves to place himself in a position to fall upon the flank of Mainwaring's regiment.

Going in against Mainwaring's regiment, Tillier closes on the his foe.  With neither foot regiment able to get the upper hand in the contest, Vaughan seizes the opportunity to attack while Mainwaring is otherwise occupied.
With God on their side, Mainwaring summons the strength to repel both Royalist attackers.  Huzzah!
Not able to contain their excitement, Mainwaring's boys advance back into the scrum with Tillier.  Again, neither regiment of foote gains and an advantage and push of pike yields no gain.

Sensing a bit of deja vu, the Royalist foote is again hit in the flank from Royalist horse.  This time the result is not the same.  Rather than repelling their foes a second time, Mainwaring's regiment is cut down where they stand.
Having destroyed Mainwaring and seemingly secured the Royalist right, Sir Byron orders a general advance on the bridge.  Finally, awaking to the danger, Meldrum orders a withdrawal towards the bridge and his only change for escape.
Greatly weakened from the first, ill-advised clash of the battle, Middleton's horse is scattered by musketry from both Washington's dragoons and Brereton's Foot.  Having dispatched Roundhead horse covering the bridge, the Royalist left wing swings to cut off Meldrum's chance to escape.  Meldrum lays down his arms and concedes defeat. 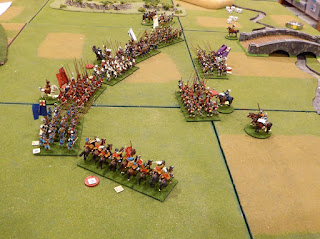 Excellent contest and a much better understanding of Baroque gained following the playing of the second game of Montgomery.  Perhaps, the first battle of Montgomery will get chronicled later?  Major victory for Sir Bryon as he controlled the bridge and prevented the Roundheads from escaping.  As Meldrum, I was out-generaled by Jake's Sir Byron.  Game provided much ebb and flow.  While the resiliency of the Cheshire foote helped, the Roundheads were unable to overcome a number of failed Discipline Tests and the greater marksmanship of their opponent.  With two games in the books, thoughts can now turn towards reflecting on my first impressions of Baroque.

Congratulations to Jake for a battle well-fought!

Posted by Jonathan Freitag at 10:34 AM