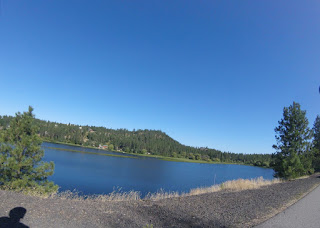 With Spokane being a rail hub and "Gateway to the West" at the height of the railroad boom in the late 19th/early 20th Centuries, the area's landscape is crisscrossed with many railroad lines.  Today, given different economies, a number of these rail lines are abandoned.  Luckily, some of these abandoned railways have been paved over and converted to trails.  Hundreds of miles of such trails await the cyclist.  One such path is the Fish Lake Trail. 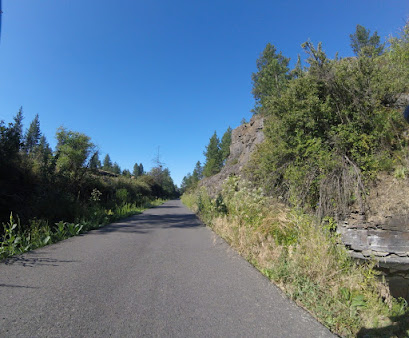 The trailhead is situated on the western end of Spokane and runs 15 miles southwest to the University town of Cheney.  Outbound, the trail is a constant and gradual incline to Cheney.  Inbound, the route is slightly downhill back to Spokane.  Downhill, that is, until I reach the Spokane trailhead.  After that, I face a grueling uphill climb home.  From my house, reaching the trailhead is seven miles.  The total mileage for this route is 44 miles.
As a converted railway, the path frequently cuts through the basalt rock, common to the region.  In the heat of summer, these railroad cuts offer a bit of coolness and tranquility under the shade of the steeply banked corridor.
Being a practical people, Fish Lake Trail passes by its namesake, Fish Lake.  Are there fish in the lake?  I don't know!
As for cycling in general and metrics in particular, July witnessed a jump in miles put into the legs.  We say that summer doesn't begin until July 4 and 2020 was no different.  With temperatures heating up, the mileage climbed as well.  When the weather is good, cycling switches over from the indoor trainer to the Great Outdoors.  Indoor cycling simply cannot compete with the motivation of cycling outdoors.  Besides, when I am 20 miles from the house, I simply cannot climb off the bike and call it a day like I can after 20 miles on the trainer.
Now to the metrics.  I logged 834 miles in July.  June saw 552 miles logged but about half of those June days were spent on the trainer, indoors avoiding the rain.  Notice, also, that there was no day off in July for me!  My leg, broken in January (January sure seems like an eon ago, doesn't it?), works as expected although some stiffness, swelling, and soreness remain.  Fifty-two hours in the saddle?  That is a shocking statistic. 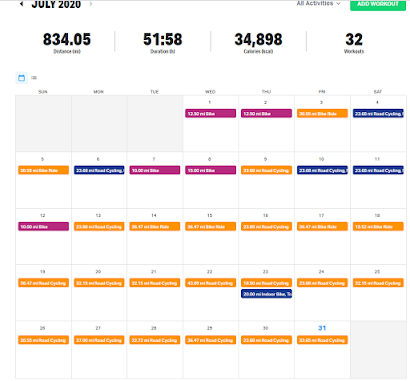 Can I repeat this level of mileage in August?  Well, with no travel plans on the horizon and time on my hands, don't rule it out.
Next time, I plan to put the finishing touches on another project.
Posted by Jonathan Freitag at 12:00 AM