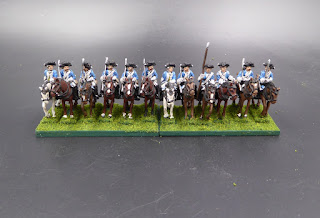 Having recently mustered a trio of Prussian guns out from the painting desk and with Kunsersdorf in mind, the brush remained engaged in the 18mm SYW project.  In a similar manner to the Prussian artillery before, these dozen horsemen represent the last of the Prussian dragoons remaining in The Lead Pile.  Although there is a fair number of packs of Old Glory and Lancashire Games' SYW infantry in inventory, the ranks of the Eureka figures are beginning to show strains of depletion.  Luckily, I have a gift card or two and Eureka is offering a December sale.  I need to start making a list and checking it twice. 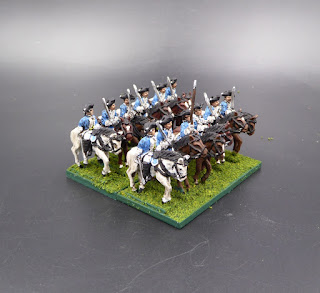 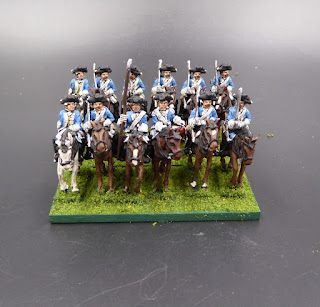 Thoughts of preparing for Kunersdorf continue.  The battlefield has been laid out and an OB drafted.  The battlefield, itself, is in draft form as well.  While I made what I consider reasonable terrain and space assumptions, time will tell once troops are deployed if the space and distances remain reasonable.  I plan to take a few battlefield photos this weekend and see where I stand.  In the meantime, the painting desk remains busy.
Posted by Jonathan Freitag at 12:00 AM