After having seen four out of the last five units pushed across the painting desk in the 25/28mm category, activity returns to 15/18mm figures generally and the 1799 project specifically. 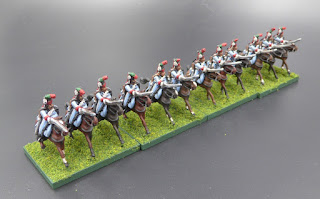 Figures are French hussars from Lancashire Games' 15mm French Revolutionary Range.  These troopers are kitted out as the 1st Hussar Regiment in their light blue dolman, pelisse, and breeches.  Wearing a mirliton wrapped in red flambe with red over green plume plume,  these sharply dressed troopers are ready to impress. 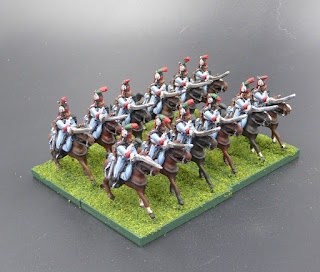 As other Lancashire 15mm figures, the cavalry contain only a single pose and no command.  I wonder if command will be forthcoming?  Command would be a welcome addition although too late for these fine chaps.  Besides lack of cavalry command, one other minor complaint is the trooper's base.  Base is very narrow making standing upright until the glue sets a precarious proposition.  In the end, all is well and these fine fellows await their first battle.

Soon to join the French hussars for the project will be a third regiment of Austrian dragoons in bicorne.
Posted by Jonathan Freitag at 8:31 PM