In quite an unusual circumstance, I managed to get a second FtF gaming session in during the month of March.  Perhaps my version of March Madness?

On the table for this evenings activities was the same battle Kevin and I fought earlier in the month (see Battle of Pharsalus) using Command & Colors and 6mm armies.  Since Caesar took honors in both of the earlier battles, I wanted to give Pharsalus another go to see if Pompey could manage a victory.  Caesar seemed unbeatable in our first meeting.  On the Commands & Colors: Ancients website, recorded games show Caesar winning the battle about 75% of the time.  Could the battle's conclusion be that predestined?
With SoA's Battle Day fast approaching on 02APR2016, replaying the battle in anticipation of reading great BatReps from that event seemed motivation enough.  When Kevin arrived loaded with pizzas, we set to work on both the food and game.
To recap the game situation, Caesar is outnumbered by Pompey's forces but the Great Man holds the advantage in punch.  Add in Caesar's personal attributes and the Caesarian army is a tough nut to crack.  In game terms, all medium and heavy infantry operate under the Julian Legion rules.  That is, MI and HI can throw pila at a two hex range while either stationary or moving one hex.  These same units may move two hexes without battling.  This expansion provides MI and HI much more flexibility on the battlefield and allows the big boys to get into action much more quickly.  In earlier Punic Wars battles, we found getting the HI who often were deployed deep in the third line difficult to get into action.  Not the case under the Julian rules! 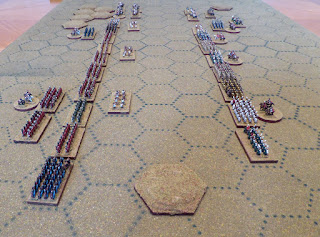 The plan for the evening was to fight the battle twice with each of us taking the command of Pompey to see if we could construct a victory.  In Game 1, I took command of the Pompeian Army and while the outcome was close, Pompey lost to Caesar 7 banners to 5.  My downfall seemed to hinge on the strong Pompeian medium cavalry wing's failure to break the Caesarian right.  Caesar's archers and cavalry on his right wing were overcome with some units being pushed from the battlefield.  Caesar, himself, was threatened but a vicious counterattack halted any Pompeian aspirations for success on that flank.  In the final stages of the battle, Caesar's heavy infantry marched up the center and laid waste to Pompey's lighter forces.  Game 1 goes to Caesar.
In Game 2, Kevin commanded Pompey while I took on the role of Caesar.  Starting with a Line Command, Caesar advanced his entire battle line towards Pompey's awaiting troops.  With success on both wings, Caesar looked ready to repeat his success in Game 1.  Rather than launching the Pompeian cavalry wing into the Caesarians to begin the battle, Pompey reserved his cavalry arm.  When Caesar made a deep penetration into the Pompeian line, Pompey launched a savage counterattack including the playing of a First Strike card.  The Gods were in Pompey's favor this day.  With fantastic dice rolls, first Sulla and his HI were destroyed in hand-to-hand combat and Caesar and his heavy infantry were weakened.  Reinforcing these successes, Pompey struck with all four of his medium cavalry.  In repeated cavalry charges, Caesar's heavy infantry were destroyed and Caesar was left unprotected.  Caesar was unable to escape and was cut down by Pompey's horse.  With banners 6:5 in favor of Pompey, Pompey managed to pick off one bowmen to seal the victory.  Pompey wins and gets to keep his head!

Congratulations to Kevin for besting me in both games (and thanks for the pizza!).
Posted by Jonathan Freitag at 10:00 AM