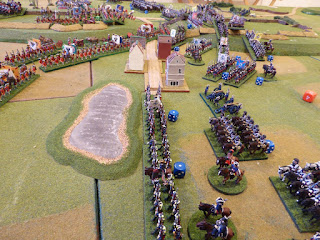 Picking up the battle where we last left off (see: Kunersdorf Part1), pressure mounts on the increasingly beleaguered defenders of the Muhlberg.  Prussian cavalry commander Schorlemmer positioned on the western salient of the Muhlberg, masses his cavalry to thwart any Russian thoughts or attempts to relieve the Observation Corps from that direction.

Back on the Muhlberg, itself, the Observation Corps begins to withdraw from the northwest face of the earthworks.  Having suffered from musketry and artillery, the battered Russians pull out before the smoldering abatis and defensive works can be stormed.  Poised for action, the Prussians await their chance to attack.
Fires sputter out and the Prussians scale the heights and swarm into the Muhlberg defenses on the northwest face.  Closing in with attacks from three fronts, the defenders are hard-pressed to maintain order.  Russian casualties rise as the Prussians close-in but continue a stoic defense.

The first Prussian musketeer regiment over the rampart is given an unpleasant greeting of a devastating volley.  The musketeers recoil and stream back down the hill in search of safety and a chance to reform.  While disrupted by the retreating musketeers, another Prussian musketeer regiment takes its place in the attack.  Considering the Prussian force sufficient to overwhelm the Muhlberg defenders, reinforcements set off in search of another place to attack.
While the Muhlberg holds much of Frederick's attention, battle lines are being drawn on the flanks.  On the Prussian left, Platen and Wurtteberg's cavalry form up in the plain opposite the Russian masses.  Kanitz's infantry brigade makes its way through the marshland to lend support.  The Russians form up as well.  With Russian cavalry formed up on the Russian far right, nearly a dozen Russian infantry regiments plug the gap between the horsemen and the heights.
On the Prussian left, a succession of charges and counter charges bring the two cavalry forces into collision.  Some cavalry regiments are destroyed while others recoil to recover and lick their wounds.  Many Prussians retire only halting when they reach the watery obstacles.  One Prussian cavalry regiment is put to flight and retreats back across the narrow pathway between the marshlands.  Prussian musketeers are disrupted as the cavalry stream through their positions.
On the Prussian right, Schorlemmer's large cavalry formation confronts Jeropkin's heavy cavalry wing at the foot of the heights.  Penned-in by the ridgeline on one side and the water meadows on the other, the two foes stare each other down like gunfighters in a shootout.  Who will twitch first?
The attack on the Muhlberg begins in earnest. While Prussian musketeers pour volleys into the defenders, Schenkendorff's grenadiers sweep over the earthworks and crash into the Russian defenders.  One Russian gun is caught in the rear and a Russian musketeer regiment is hit in flank.  Destruction is almost immediate and complete.
While the defenders give ground and are pushed back into the bottleneck of the defensive works, the Prussians press on.  The rough ground in the grund, cleaving the two Russian defensive works, is making an organized withdrawal difficult.  The growing panic among the Observation Corps can be felt.
Two of the three batteries on the Muhlberg make good their escape as defenders fight spirited rear guard actions to keep the grenadiers at bay.  The Prussian attackers press forward to corral the refuges of the Muhlberg Last Stand but surrounding and surrender are not in the cards.
On the Russian left, a line of infantry forms up at the base of the hill, solidly anchoring that flank.  The Prussian will not be cutting off the Muhlberg from this direction.  Similary, a line of Russians forms up to the right extending from the Muhlberg through the outskirts of Kunersdorf.  This formidable line of red waistcoated Russians will be a very tough nut to crack.
Back on the Prussian left, the once promising Prussian bridgehead is collapsing as Russians converge upon the Prussians positions.  Halting a retrograde with backs to the almost impassible wetlands is no place to find oneself as the Prussians begin to withdraw.

Trying to make good their escape from impending disaster, the Prussian left makes its way through the difficult ground and reforms in a defensive line with the wetlands to their front.  A number of Prussian regiments will not make it back to safety having been shot up by overwhelming firepower of the many Russian musketeers.  As Prussian batteries are brought up to this new front, any Russian attempt to force this position will be met with failure.
Looking down the battlefield from the northwest, the Russians are giving ground sparingly in the center while their flanks stiffen.  The Prussians have taken the Muhlberg.  Losses in the Observation Corps are high but a number of units slip out of the Prussian noose.  The way in which the armies are arrayed, a Prussian breakthrough today is unlikely.
With time growing short in this gaming session, we switch from play to commentary on the present state of the battle.  After a number of likely "what if" discussions, we decide to end the game at this point in the action.  As in Game 1, Game 2 ends in a situation reminiscent of the historical battle.  That is, the Prussians have taken the Muhlberg.  The battlefront stabilizes in a line running west to east in a line driving straight through the grund, Kunersdorf, and the lakes and marshes.  Further gains will be unlikely given the large number of Russian reinforcements on its way to bolster the Russian line.
Was the battle a fun?  Sure!  Was this a reasonable place to cease hostilities and call the game?  I think it was.  This is almost the same situation in which Game 1 ended and agrees with the historical account as well.  We entertained the notion of continuing play on a later date but work schedules and a broken leg dashed those thoughts.  Continued fighting would have only resulted in higher casualties with little ground gained.  Could the Russian Army have been broken?  Unlikely.  The Russians still maintained a huge reserve that was yet to see action.  When I am able to walk around the table again and can stand for awhile, I may move a few pieces around before I clear the table.

Refighting these big, historical battles provides much to think about and brings accounts in the history books alive.  Add Kunersdorf to the list of SYW battles already tackled on the gaming table.  With Kolin, Mollwitz, Zorndorf, and now Kunersdorf in the books, what is next?

For now, time to return to the painting desk as I can now safely negotiate the stairs on crutches.
Posted by Jonathan Freitag at 9:00 PM