Austrian IR#30 and Other Stuff 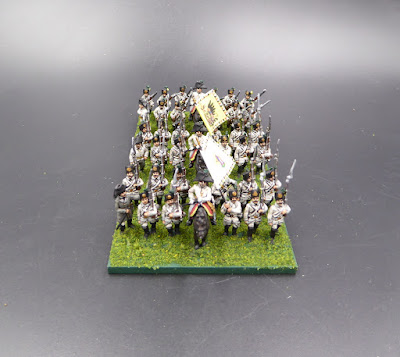 With the Battle of Rivoli raging across my gaming table, the painting desk is seeing an uptick in FRW units in work.  Coincidence?  The latest units mustering out from the painting desk are three battalions of Austrian infantry from IR#30.  While IR#30 is not needed for the current Rivoli battle, they will see service another time. 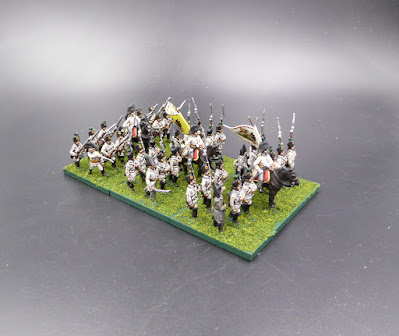 These 39 figures are from AB Miniatures.  A quick look into The Lead Pile finds enough of these figures to field two more Austrian regiments in casquet.
On the remote Battle of Rivoli front, mentioned before, the battle is heating up.  An hour and a half in game time (three game turns) is in the books and dispatches from the generals are flowing freely across the battlefield while French brigades and Austrian columns collide.  Without giving away any more details than the generals have at-hand, below is the battle situation at 1000.  I am having a great time coordinating dispatches and translating orders to the gaming table.  There have been a few tense moments already.  The Austrians are driving hard from the west and north but the French are holding on.  In the east, the cork is still in place in the Osteria Gorge and the Austrian columns remain bottled in the Adige Valley.
Finally, I take to the skies later today in a remote, multi-player WWI aerial combat.  Seven pilots are slated for the action as we fight for supremacy in 1/72nd aircraft.  I will likely be piloting an Albatros DIII.  Perhaps, it will look like the aeroplane below?  After today's action, another new set of rules will be added to my repertoire.  That makes five new rules played in the last two months.  Whew!