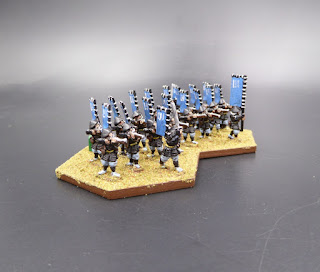 Seems like I am jumping all over the place with respect to many projects seeing action at the painting desk.  That perception is true.  However, today I muster out the first of three units for the Samurai Battles project.  First off the work desk is a 19-figure stand of teppo.  As always, figures for this project are from Peter Pig.  Excellent sculpts and a joy to paint. 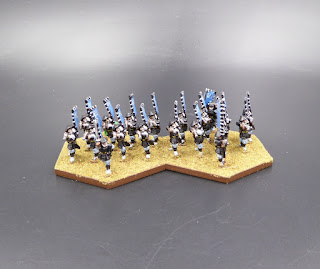 In an attempt to clean up The Lead Pile, I have been toiling through the boxes to see if some boxes can be better organized and consolidated.  Among the stacks of boxes and bags of figures, I uncovered two orders from Peter Pig containing Feudal Japanese.  Those bags had filtered down into parts almost unknown and certainly almost forgotten.  Quite fun to find lost treasures!  Both orders were relatively new orders picked up from recent sales.  Sorting through the bags of figures, enough figures were found to form one unit of Ashigaru teppo, one unit of Ashigaru spearmen, and four units of Samurai mounted cavalry. 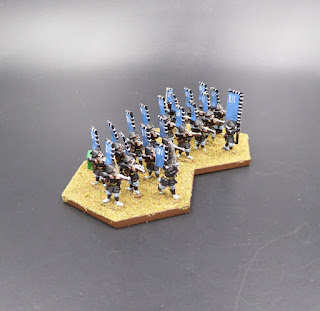 While the teppo form up and march out today, two of the Samurai cavalry units are finished.  A third cavalry unit is in work.  Expect to see the first two Samurai cavalry up next in the photo booth.  Nearing almost six years since the collection was out on the parade ground (see: Samurai Battles Project in Review), a display highlighting all of the work completed, thus far, seems a good idea.  I wonder to what extent the project has grown in the intervening six years.  I may be surprised.   Hopefully, pleasantly.
Posted by Jonathan Freitag at 12:00 AM