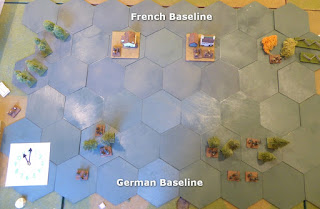 I pulled Norm Smith's Tigers at Minsk (TaM) rules down from the bookshelf and settled in for a Saturday night read and think.  Having quickly sprayed a stack of four inch hexes with a coating of green paint in the bright afternoon sunshine, my plan was to give the rules a go for a solo battle on Sunday.  With a minimalist playing surface (maybe I will flock the hexes to cut down on the glare?) and a handful of troop stands, I set to work.

With no armies for the eastern front circa 1943, I pulled French and German troops from the box and set up Scenario 2.  With no requirements for eastern front armor, this would be a perfect infantry-only introduction.  The battle venue is transported to France, 1940.

Scenario 2 - Following the Elefants
OOB:
To win, the Germans must exit at least one infantry stand off of the French Baseline.  Otherwise, French victory.  Game begins at 11:00 and ends at 11:50.  French first player.

I will provide my First Impressions in another post but for now, straight into action.

Well!  That was a quick, exciting, and bloody battle.  A few lucky rolls but luck was impartial.  Both sides saw some well-timed shooting. Had the Germans held position and fired rather than withdrawn on the last turn, the French HMG may have been destroyed. If so, victory would have gone to the attacking Germans.

This is a very interesting scenario with much to think about with respect to force deployment, strategy, and tactics.  With the Germans setting up first, the French can place their outnumbered forces to their best advantage.  The Germans have difficult deployment choices to make.  Placing most of the weight on one sector guarantees that the French will do the same.  With villages near the center of the table, the  French can take a central position and keep most German advances in a cross fire.  Where to best place the French wire?  I opted for the hex adjacent to the scrub to prevent a German outflanking on the right.  I am sure other placements are appropriate.

I think I will reset and give this another try.
Posted by Jonathan Freitag at 12:00 AM