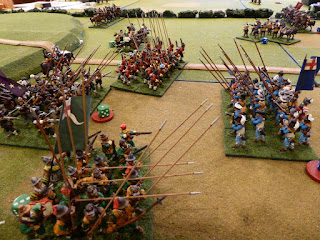 A second solo battle of Southam jumps into action on the gaming table.  After this battle is wrapped up, the deck will be cleared for the next planned battle.  I think it may be Kunersdorf.

As a reminder of the situation, see deployments below:
Turn 1.
Parliament army under Lord Brooke steps off toward the Royalist positions.  As Brooke's force descends the heights, one of his light guns positioned astride the road fires into Carnarvon's Horse disrupting its ranks.  Carnarvon withdraws to a safer distance passing through Clarke's Horse drawn up to his rear. 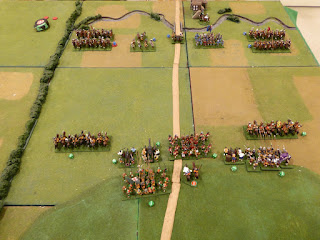 Handily outnumbered in infantry, the Earl of Northampton tries to bring his comparative advantage to bear early.  That advantage? Cavalry.  On the Royalist left, Northampton's Horse wasted little time and sets off toward the Parliamentarian line.  Facing him in the distance, Goodwin's Horse responds.  In the initial clash of man and horse, Goodwin's disciplined horse gains an advantage and the Royalist horse breaks for the rear.  Shaken from the clash, Goodwin does not pursue.
In support of Northampton, Middleton's Horse passes through the retiring horse on his way to seek revenge upon Goodwin.  Shaken from the earlier melee, Goodwin attempts to evade the charging Royalist horse.  Beginning his retrograde a little too late, Middleton catches Goodwin near the foot of the heights.  While both suffer from the fight, Goodwin receives more than he gives.

Continuing his withdrawal, Goodwin's retreat uncovers Hampden's Foote.  Middleton's pursuit targets the Parly foote.  While Hampden cannot stop the charging Royalists through volley, Middleton is sufficiently discouraged from pressing on and recoils after a brief melee.  Both suffer in the fight but Middleton is much worse for his exertion.  Still, the charge is deemed a success as Goodwin is sent packing and Hampden is shaken and weakened.  Still, Middleton teeters on collapse.  One little shove and he may be gone.
Turn 2. Lord Brooke retains initiative.
Hampden's Foote rallies while Goodwin's Horse does not.  Brooke's two guns on the left fire on the Royalist guns near the bridge.  The fire is too much and the Royalist gunners scamper away.  The guns deployed on the right of the road fire on Northampton's Foote to no effect.  Lord Brooke's Foote advances up the road.
For the Royalists, Carnarvon's Horse rallies while the nearly exhausted Middleton withdraws.  The Earl rides over to rally his own regiment of horse.
Turn 3.   The Earl of Northampton seizes the initiative.
On the Royalist right, Clarke's Horse charges Fiennes' Horse.  Fiennes' cannot muster the courage to counter charge.  Instead, he falls back.  Unfortunately, this retrograde uncovers one of Lord Brooke's guns.  The gun gets off a shot before overtaken by the hard charging cavalry.  Clarke's Horse absorbs the casualties from the close range artillery blast but overruns the guns.  The crew are cut down where they stand and the gun destroyed.  Their momentum carries them into Brooke's second gun.  Again, the crew manage to fire off a last minute blast and more horsemen hit the ground.  Tired from their exertions and exposed, Clarke's horsemen retreat toward a less hazardous environment.
Following up on Clarke's success and with Fiennes unable to respond, Carnarvon charges the remaining gun that had only moments before driven off Clarke.  Seeing Carnarvon come on from a great distance, the gun has time to reload and fire.  Although mostly ineffective, the artillery fire is enough to discourage Carnarvon from pursuing the prize.  He turns and retreats back to his lines.
Riding over to Middleton, Northampton rallies his victorious troopers and leads them back into the fray.  Wanting to knock Goodwin's Horse out of the fight for good, Middleton charges.  Shaken, Goodwin withdraws cautiously. The Earl, leading Middleton's horse in pursuit of the withdrawing cavalry of Goodwin, reaches the end of his tether.  Nearly exhausted from the long charge, Middleton balks at the sight of Goodwin not in full flight.  At the end of his tether, the elastic snaps and Middleton breaks.  Oh, the tragedy!

Fiennes and the remaining gun on the Parliament left rally but Goodwin does not.  Brooke's Foote fires into the dragoons.  The dragoons suffer from the volley but hold their ground.   Holles' Foote advances upon Carnarvon's Horse and unleashes a volley.  A number of horsemen fall as Carvnarvon continues his retreat.
Turn 4. Lord Brooke regains the initiative.
Goodwin fails to rally and Hampden's Foote fires into the exposed flank of Middleton's Horse but fails to find its target.  Fiennes' Horse charges Carnarvon.  With a Combat Effectiveness at 1, Carnarvon is likely to retreat.  He does.
The gun on the right fires into Northampton's Foote.  The Royalist infantry take casualties and falls back.   Holles' Foote advances on Clarke's Horse.  Clarke smartly falls back.  Brooke's Foote fires into the dragoons.  Saville's dragoons suffer casualties but hold their ground.  After unleashing a volley, Brooke charges.  The dragoons evade and scamper back across the river by way of the bridge.
With the dragoons turning tail and retreating, Brooke veers to hit Northampton's Foote.  Northampton buckles and the regiment falls back in retreat.  With both Royalist artillery and dragoons wavering near the bridge, Northampton's retreat through their ranks as it scrambles to reach safety on the south side of the river is too much.  Both the dragoons and artillery break when Northampton's panicking infantry pass through them.
With the only Royalist troops on the north bank of the river being cavalry and they in shaky condition, the Earl of Northampton abandons his position and admits defeat.  Southam is a victory for Lord Brooke and the Parliamentarian cause.

Again, Southam provided an interesting little action.  With no more than eight units per side, fate can play a big role in determining the outcome.  Even with the possibility of luck rearing its head, the battle was closely contested.  Ebb and flow of battle was present throughout.  The Royalists saw good success early on with their cavalry.  Taking out one gun, a second gun was in great peril.  Cavalry battles witnessed successes and setbacks for both.  Goodwin's cavalry once shaken never managed to regain its composure.  The best Roundhead horse regiment on the table neutered early on.  What a waste.In the end, the Royalist position disintegrated when retreating units fell back onto themselves in the rush to clear the bridge before being trapped.

For now, the ECW collection will be boxed up and put away for another day.  Next up is likely a try at Kunersdorf in December.  Details on the scenario are still in work but I am forging head with deploying the terrain onto the table.  Kunersdorf will be another in a long line of battles in which I wonder how Frederick ever got the moniker of The Great.
Posted by Jonathan Freitag at 12:00 AM